At the risk of sounding like a condescending ass, knives aren’t bullets. The only exception is when I butter my toast with ammo in the morning. (Image by imaspy via sxc.hu)

TLDR: Most likely not.

Bulletproof vests on walls of corpses sparked the idea for today’s topic. But before I get into that, a point of clarification.

Anyway. Let’s get into this. Could a ballistic resistant vest also stop a knife or other edged weapon? The answer starts with understanding how body armor works.

As the National Institute of Justice (basically the body armor guru in the States) points out, there are two types of body armor: ballistic resistant (for bullets and other projectiles) and stab resistant (for edged weapons like knives). Both of these categories try to achieve the same thing: stop something from passing through the armor. However, they achieve those goals in different ways.

Ballistic resistant armor disperses kinetic energy from a projectile, like a bullet, through a network of fibers (such as Kevlar) sort of like a speeding soccer ball getting trapped in goal netting. Depending on the level of resistance, the armor might also use hardened panels to better redirect that energy. You can watch a video detailing how this works here.

Stab resistant armor is different. It’s made of several layers of strong materials (such as Kevlar) that more or less catch the weapon as it strikes. The edge (slashing) or tip (stabbing) of the weapon is caught inside the material yet unable to make a cut. Here’s how that process works.

Not all stab vests work with a metal layer on top, but the idea to catch the knife in the material is the same. (Image courtesy TurtleSkin.)

Like ballistic armor, stab armor is separated into levels of resistance: I, II and III. The higher the number, the more force it can withstand.

Both Types Use Kevlar, So What’s the Difference? 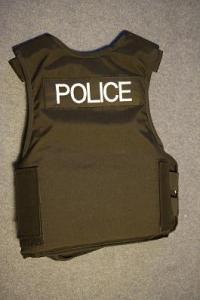 Is this a ballistics vest or a stab vest? It’s hard to tell because the vest itself isn’t anything special. It’s just housing for the inserts that go inside. The inserts are what contain the materials that will stop a bullet or a knife. (By SGGH speak! 16:20, 3 January 2008 (UTC).SGGH at en.wikipedia [Public domain], from Wikimedia Commons)

It’s true that both types of body armor consist of strong materials like Kevlar, but it’s the way those materials are used that matters.

With a ballistics vest, energy is redirected across the armor. A stab vest is less concerned about redirecting energy, and instead allows the edged weapon to penetrate into the material (that’s a critical detail). That’s where the stab vest nestles the weapon in strong materials that the edge or point can’t completely cut through.

This is a major difference, and you might already see where it’s headed.

Because They Allow for Some Penetration, Stab Vests Aren’t Good at Stopping Bullets

Allowing for a little bit of penetration goes a long way when you’re talking about stopping a bullet. Sure, a stab vest might stop some of the lighter calibers on a good day. But the intermediate and larger calibers? Forget it.

The opposite is true when it’s a ballistics vest up against a knife. That type of armor isn’t designed to trap an edge or point in its fibers. Yeah, it offers a degree of protection that could prevent injury, but don’t bank on it.

Nope, a “bulletproof vest” most likely wouldn’t stop a knife. I wouldn’t go so far as to make an absolute verdict, because there are always exceptions. There’s room for creative license, but you might want to highlight why in the story.

How This Impacts Your Characters

The setting can play a part in which type of body armor a character uses. Civilian firearm ownership is highly restricted in the UK. Police officers there typically wear stab vests, as in the photo, because the risk of being attacked with a knife is most likely. (By KRoock74 (Own work) [CC BY-SA 3.0 (http://creativecommons.org/licenses/by-sa/3.0)%5D, via Wikimedia Commons)

If you’re going to assign body armor to your characters, decide which category will be used. Match it to the threats present. For example, prison officers would opt for a stab vest because of the low risk of gunfire. Likewise, a character raiding a well-armed drug lord’s mansion would pick the ballistics vest.

This also means a character with a knife isn’t out of options when an opponent shows up with a ballistics vest, especially given the 21-foot rule. (Read more about that in The Writer’s Guide to Weapons.)

10 thoughts on “Can a “Bulletproof Vest” Also Stop a Knife?”