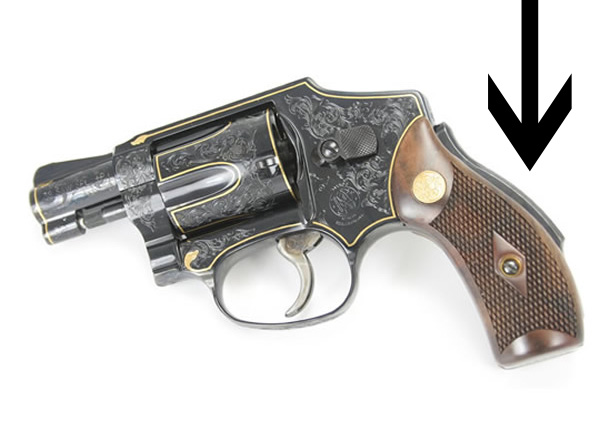 This is a Smith & Wesson Model 40. It’s one of the few revolvers to use a safety. Instead of a switch or button, it uses what’s called a “grip safety.” It sits behind the grip, and must be pressed (i.e. palmed) before the gun can fire. This is the exception, not the rule. The vast majority of revolvers do not use safeties. (Smith & Wesson photo)

TLDR: Assume that revolvers don’t use safeties unless you can prove otherwise through research. Mention that specific model in the story.

Here’s an easy one. The short answer is no, revolvers do not have safeties in the same way some semi-automatic pistols do. There isn’t a switch or other device to press before the revolver can be fired. Usually.

This is as close to a hard and fast rule as you’ll find in the world of handguns. Because of their lengthy history, revolvers with safeties do exist. They’re uncommon, though. When writing, assume all revolvers do not have safeties unless you can prove otherwise through research. Then make sure you point out the specific model of revolver in the story. Otherwise, you’ll wind up looking like someone who can’t tell the difference between a revolver and a revolving door.

The rule of thumb is easy enough to remember, though: Revolvers don’t have safeties.

What Can Characters Do Instead of Switch Off a Safety? Stop, Hammer Time

If the thought of a revolver without a safety gives you a sense of uneasiness, I can tell you the feeling is unwarranted. A safety is a mechanical component of a firearm. Just because it’s called a “safety” doesn’t mean it’s the only way to prevent an accidental discharge. By design, a loaded revolver will not fire unless some specific things happen. What those are depends on the type of action the revolver uses. By the way, an “action” is the mechanism a firearm uses to fire and cycle ammunition.

I’ll do my best to keep this simple. Revolvers can be divided into two camps.

With a single-action revolver, the hammer must be pulled back (i.e. “cocked”) before the trigger is pulled. If it’s not, simply pulling the trigger won’t fire the gun. For reference, here’s what a hammer looks like: 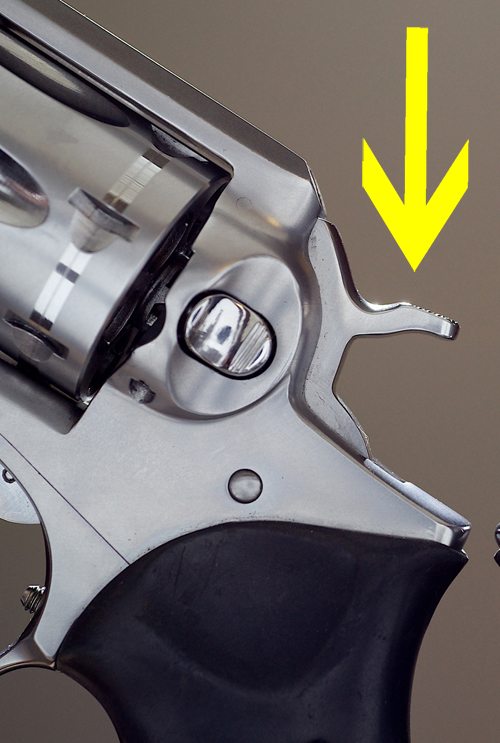 Not all revolvers have external hammers, but many do. Here’s what a typical one looks like. (Gun Digest photo)

That cocking requirement (band name, called it) acts as a sort of safety all on its own. However, single-action revolvers are old hat. Most modern revolvers are…

Either way, the primary method double-action revolvers use to prevent accidental discharges is in the trigger pull. Unlike other firearms, these triggers offer more resistance. They’re not “hair triggers,” and they take a serious squeeze to fire. It’s hard to explain that without putting a revolver in your hands and showing you. But take my word for it.

Here’s what one of those hammerless revolvers looks like:

Here’s a quick reference to sum up these points.

If a character is using a single-action revolver: Don’t switch off the safety. Have the character cock the hammer first, then fire, then cock the hammer again, then fire again. Repeat until the ammunition runs out. (Note that not all revolvers are six-shooters.)

If a character is using a double-action revolver: Don’t switch off the safety. Have the character pull the trigger. That’s it. It can get more complicated than that if you’re more familiar with firearms, but it doesn’t have to be.

If you’re not sure what kind of revolver a character is using: Don’t switch off the safety, and don’t mention a hammer being cocked. Depict the character firing the revolver and leave it at that. Write around what you don’t know. So long as the story is moving forward, no one will notice.

It Happens to the Best of Us

If you’ve made this mistake, you’re in good company. None other than David Morrell, creator of Rambo and author of piles of awesome novels, wrote in a character switching the safety off a revolver. In fact, he wrote about it in his foreword (I still can’t get over how cool that is) to my book, The Writer’s Guide to Weapons: A Practical Reference for Using Firearms and Knives in Fiction. Here’s an excerpt:

I had foolishly decided at the last minute (the very last minute, because the novel was at the galley stage, my final opportunity for corrections) that there were a lot of semi-automatic handguns in the book and for variety maybe I should change one of them to a revolver.

Writing those words, I grit my teeth. My chest tenses. My face turns warm with shame. Aarrgh.

On top of the safety issue, Morrell’s story hits home on another important point. If you’re going to change the type of firearm in a story, make sure to also tweak how it’s used. That goes for a semi-auto pistol switching to a revolver, a shotgun turning into a rifle, an assault rifle scaling back to an AR-15 (pro tip: read more about AR-15s and assault rifles here) and so on.

By the way, this isn’t a safety, even though it might remind you of one. It’s the cylinder release. Pressing that allows the cylinder to swing open. 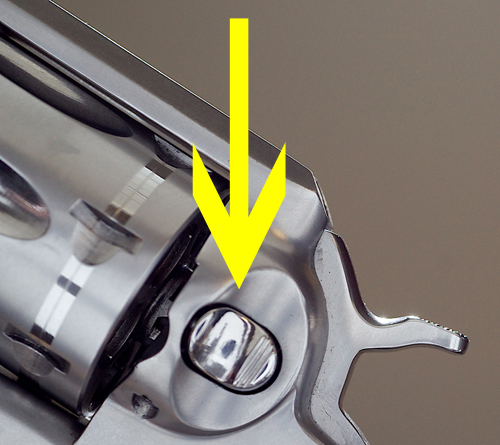 What’s that tab that looks like a safety? That’s a cylinder release. (Gun Digest photo)

The cylinder is the round thing that holds the ammunition, like this:

The holes inside the cylinder are called chambers. That’s what the ammunition is inserted into. There are six chambers in this example. (Shutterstock photo)

If you assigned revolvers to your characters, how did you do it? You can read about crime writer Dana King’s characters’ revolvers here.

24 thoughts on “Do Revolvers Have Safeties?”