This guest post comes from Travis Pike. He’s a Marine veteran, a firearm instructor and a writer. The post that follows pokes a little fun at stereotypes in the gun world, but I think his satire can apply to assigning handguns to characters, too. Have fun with it!

By this point in time the old revolver guys are out of their prime, hardly gun slingers anymore. These days those men and ladies packing revolvers do it because of a sense of nostalgia and the cool factor associated with the sixgun. There’s nothing wrong with that, and it’s hard to beat the cool factor of a Smith & Wesson 686. Who really needs more than six rounds? Revolvers don’t jam, and you don’t even really have to know what timing is. Plus, there are polymer revolvers that are totally retro new school.

Sure, revolvers are stereotypically for the old school guys, but that ship has sailed. These days the old school guys grew up with big, heavy, steel frame semi-automatics. The beat cop 30 years ago wasn’t carrying the Smith & Wesson Model 10 or the Colt Python revolvers, no sir. You carried your boat anchor with pride, always knowing if you ran out of ammo you could beat someone with it. You were part of the wondernine generation and still don’t understand why tupperware is part of a gun.

Owners of 1911s used to fall into a few different groups, from the old school military guys, to those with modern tastes in a classic weapon. All these groups have merged to build the 1911 supercult. As a 1911 user you believe there is no better gun, and gun design pretty much quit after John Browning delivered this weapon from heaven. You don’t need more than eight rounds, you don’t need no stinkin’ polymer, and you sure as hell don’t mind spending a few grand on a premium 100-year-old design. Also, who cares if your gun is mag picky.

These 1911 guys and gals spend time to perfect their own skills to fill the inadequacies of the century-old design. A 1911 user isn’t just a 1911 owner. They are a complete cult, dedicated to the one true gun. 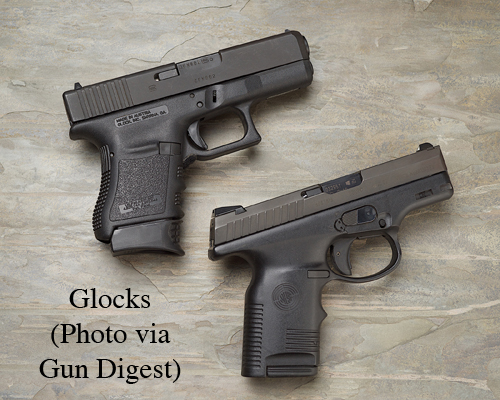 You drive a Honda Civic with a wing.

Everyone says get a Glock, so you did. It works every time you pull its plastic trigger. You don’t care if the trigger is sub standard, the grip is like a 2×4 piece of lumber, and the gun is about as attractive as the Elephant Man. You spend a little and replace the trigger, then a little bit more so you can replace the sights. After that you can get the grip stippled, and then maybe all titanium internals. You can keep spending money until your Civic, err, Glock, is a real gun.

Glock guys tend to understand their weapon is utilitarian, but can’t seem to accept it’s good enough as is and try to spend money to fill their ‘perceived’ problems with it.

You think you can buy shooting skills.

As you lovingly finished your newest Soldier of Fortune magazine, you hold your SIG P226 in your hand and think of how it could have killed Osama. When you pick your H&K you’re not just picking up a gun, you’re picking up a piece of art. With these guns you don’t need time at the range. In fact, they pretty much shoot themselves for you. The handcrafted German/Swiss engineering has resulted in a level of perfection no one but Zeus himself has touched, and you have it in your hands. Customer support means little to you, as does your children’s college funds. Who needs college when you have a SIG X5?