Note from Ben: While I haven’t posted a new article in some time here, I will share interesting questions as they come in from time to time. I have no intentions of shuttering this site. It and the accompanying book are here as resources for writers.

I’d like your advice on selecting a knife for a character in a historical detective novel. It’s set in 1948 in NYC, but I’m not particularly worried about knife laws. (My P.I. takes an “easier to ask for forgiveness than permission” approach to weapons laws in general.)

I’m aiming for a fixed blade knife he keeps strapped in a sheath on his ankle as a last resort/surprise defense weapon. His skill level is intermediate; a knife isn’t his go-to, but he knows how to use it. The F-S, KA-BAR, and Randall Model 1 you list in your guide all seem like nice (and iconic) choices, but given the overall length of about a foot plus the sheath, I’m not sure if they’d be too bulky for a guy that spends a lot of time on foot.

I realize I could just write around it and say he’s carrying a switchblade or boot knife or a combat knife, but my character is a tech junkie type when it comes to weapons, and I think it’ll be more fun for the reader if they can visualize the model. Thanks for any help you can give me, and thanks for the guide.

The good news is that your novel is set after World War II, which means there are loads of knife options. The backbone of much of the commercial knife industry as we know it today was formed during the first half of the 1940s. Military boot knives were available on the U.S. civilian market, and they mostly would’ve originated from the U.S., British, German and Japanese militaries.

In World War II, when these knives were strapped against the ankle, they were worn primarily by pilots and airborne units for jumps because, as you pointed out, walking long distances with a foot-long knife strapped to your ankle isn’t comfortable. The knives were either strapped to the outside of the ankle or slipped into a sheath secured against the leg. These public domain images demonstrate those styles: 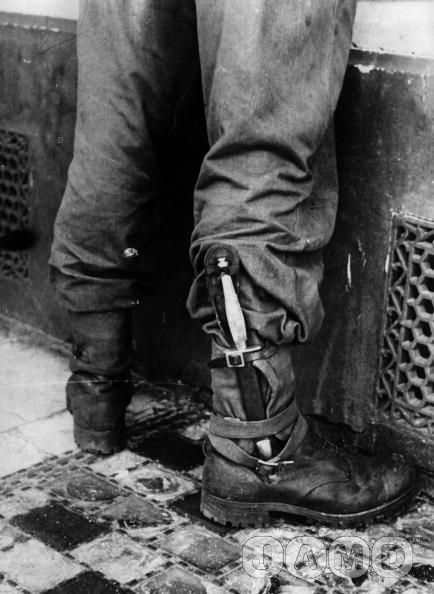 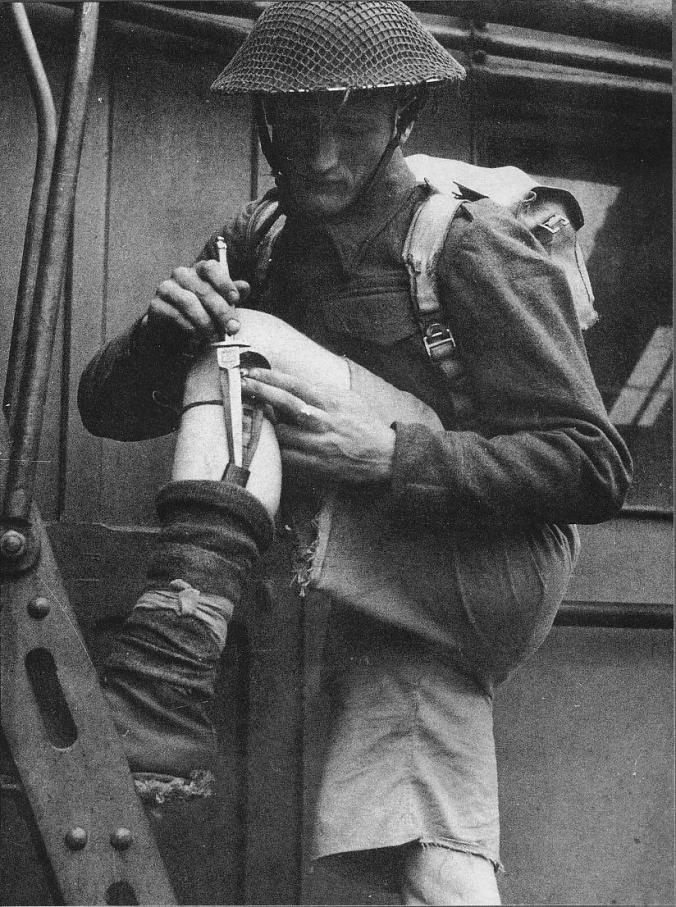 For your detective character, either method of wear requires some thought about access and discretion. Keep the character’s pants loose enough so the sheath doesn’t print against the fabric, and also so that the detective doesn’t need to stop and roll up the pant leg to get at the knife. (Those could be cool details to include in the story for a shot of realism, too.)

For what you’ve described, one knife model comes to mind more than any other: the Fairbairn–Sykes British Commando knife.

The slim profile of the Fairbairn-Sykes combat dagger makes it an ideal boot knife for this time period, even if by modern standards it’s too large. (Wikimedia image)

This dagger was not only used as a boot knife in World War II, there’s a good chance a U.S. civilian would’ve encountered one for sale in post-World War II NYC.

Yes, there were other boot knives along similar lines, but the F-S is the perfect fit for that time period and came in multiple variations. You can use the latter to your advantage. Make the overall length as short or as long as you need it to be, because that version was probably produced during the war (just don’t go too small, like less than 6 inches end to end). I hope that helps with the issue of your character’s comfort while walking around.

One final note: the F-S is not a glorified letter opener. It’s the real deal, as this video will tell you:

Support This Site: Pick Up My New Survival Book 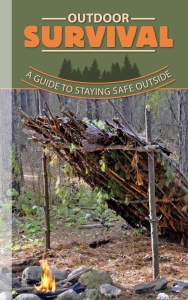 Available now at all U.S. book retailers from Adventure Publications

Outdoor Survival: A Guide to Staying Safe Outside condenses the best of what I learned during my time as an editor with Living Ready, an award-winning survival/preparedness magazine. It’s only 28 pages long, but it’s stuffed with only the good stuff. No survivalist TV show parlor tricks!

This guide is intended for the everyday person who isn’t necessarily all that interested in survival skills, but still wants to be prepared. It’s spiral bound, so it’s easy to toss into a pack or store in a glove compartment.

No matter how you keep this guide handy, don’t wait to read it when you’re in an outdoors survival situation. The best survival skills in the world can’t hold a candle to the simple, time-tested preparedness tips you’ll find inside. 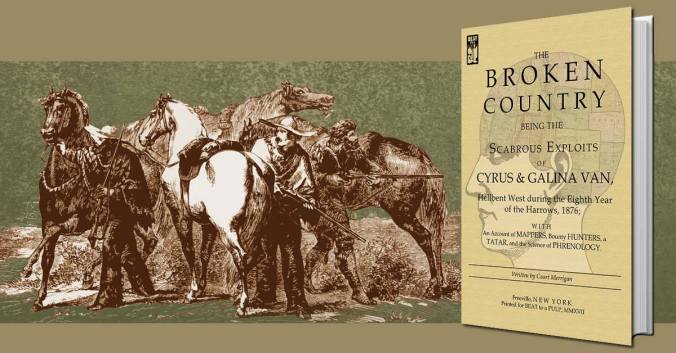 END_OF_DOCUMENT_TOKEN_TO_BE_REPLACED

Crossbows in fiction experienced a bit of a renaissance with the popularity of The Walking Dead and Daryl Dixon. But are they really any better than compound bows? This guest blog from Tomaz Rodica, of ArcherStop, compares the two. Be sure to let me know your opinion in the comments. Enjoy!

END_OF_DOCUMENT_TOKEN_TO_BE_REPLACED 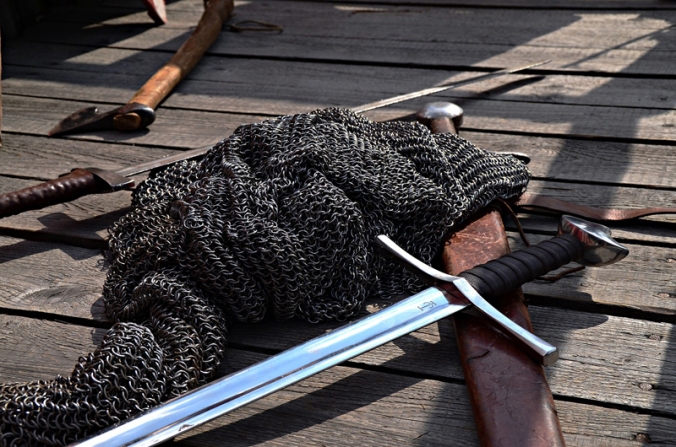 This guest post comes from Megan Robin, someone I first met at the 2016 Writer’s Digest Conference. I’m glad I did, because not only is she a terrifically talented writer, she pitches blog posts about weapons in children’s stories. What’s not to like about that? Enjoy! 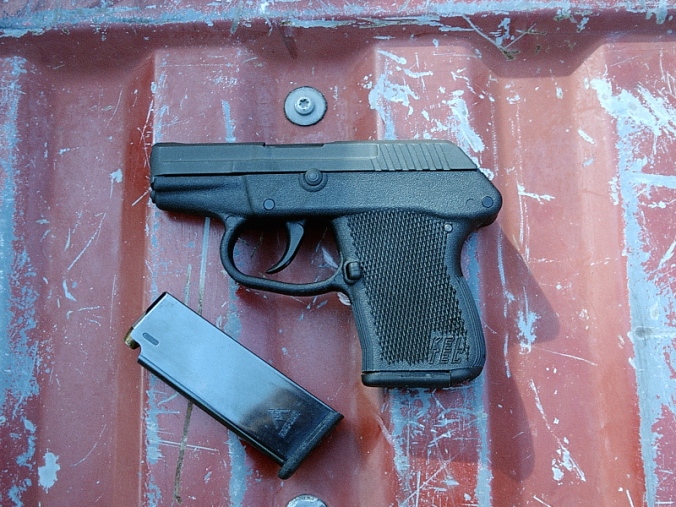 Mouse guns are small handguns that are easy to conceal, but hard to use accurately. While exact definitions can vary, they are generally considered to be the smallest handguns that still retain practical value. This .32 caliber Kel Tec would qualify as a mouse gun.
By James Case from Philadelphia, Mississippi, U.S.A. (Kel Tec P32 .32) [CC BY 2.0 (http://creativecommons.org/licenses/by/2.0)%5D, via Wikimedia Commons

I’ve defended the use of small pistols, aka “mouse guns,” in fiction before, and it appears I’m not the only one with the belief that getting shot sucks no matter the caliber. Michael Connick, who recently contributed a great piece about everyday carry setups, is here to back me up. Enjoy!