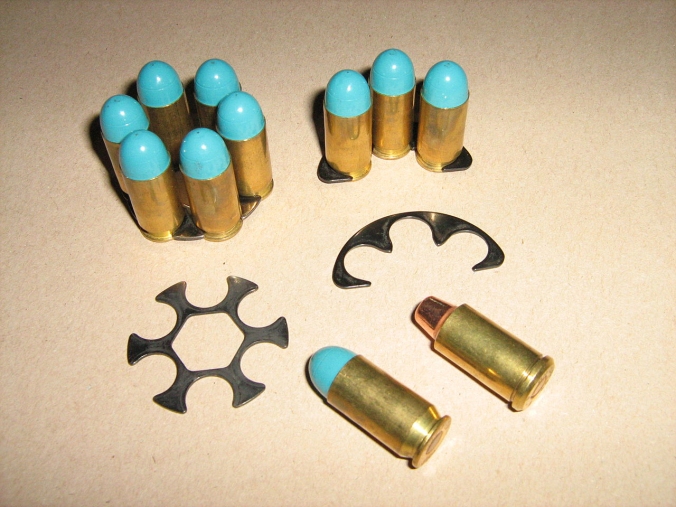 TLDR: Yes, revolvers use clips, but write them specifically as “moon clips.”

As covered previously, 99 percent of the time the right term for “detachable thing that holds ammunition” is “magazine,” not “clip.” That’s despite “clip” being used instead of “magazine” in about 99 percent of instances in fiction. It’s an easy fix – just write “mag” or “magazine” whenever you get the itch to use “clip” – but there are a few exceptions. One of those is with revolvers.

Yes, Revolvers (Sort Of) Use Clips

The word “clip” usually conjures an image of something like this:

That’s actually a magazine, not a clip. (Gun Digest photo)

Those holes are called “chambers.” That round thing those chambers are inside is called a “cylinder.” (Shutterstock photo)

There are a few ways to quickly load those revolver chambers. One of them is a device called a “moon clip,” which is sometimes shortened to just “clip.” Here’s an example of a moon clip made by Smith & Wesson:

This is a full moon clip because it forms a complete circle. If it formed a half-circle, it’d be called a half moon clip. (Smith & Wesson photo)

Although there are several styles, what a moon clip is is pretty simple. It’s a metal frame that holds ammunition in place for quick insertion into a revolver, like this:

The ammunition would be placed into the chambers via the moon clip, the revolver would be fired and the moon clip would be removed. It’s similar to how a speedloader works, if you’re familiar with those, except the clip stays with the ammunition.

A Word of Caution

Although it might be technically correct to write a character reloading a revolver with a clip, my sense is that clips are misused so often in fiction that you’re still going to look like a doofus. Make sure to include the word “moon” in there to avoid potential doofifity. (Yes, I made up a word while talking about being accurate with words.)

Clip: Don’t use this term when describing characters loading revolvers UNLESS you’ve already established in a previous instance that it is a moon clip.

Moon clip: Bingo. Tossing the word “moon” in there makes all the difference. Use this one.

Speedloader/Speed Loader (pick one and stick to it): These are a separate kind of device, and are not synonymous with moon clips. They are, however, totally acceptable for characters loading revolvers. The speedloader itself isn’t inserted into the revolver. A speedloader is a device for quickly dropping ammunition into a revolver’s chambers. A speedloader would not be used to remove that ammunition. By the way, pistols (i.e. handguns that aren’t revolvers) do not use speedloaders. The majority of pistols use magazines (not clips).

Speedstrip/Speed strip: A speed strip is similar to a speedloader, except it’s a flexible strip designed for quickly thumbing ammunition into the chambers. Used only with revolvers, not pistols.

Shortcuts: Write Around What You Don’t Know

Of course, a character could always load his/her revolver by hand, too. That way you can skip this technical jargon and move on with the story. A simple “Maynard loaded the revolver” without mentioning how is another shortcut.

3 thoughts on “Do Revolvers Use Clips?”