You’ll find the .38 caliber comes up quite a bit when researching +P ammunition. (Image via Midway USA)

TLDR: A higher velocity version of a cartridge useful for self-defense.

Following up from a previous post about magnum ammunition, I thought it’d be a good idea to explain +P ammo. This type of ammunition is similar, but not quite identical to, the magnum concept. This post is going to get technical, but bear with me. There’s a good reason to know about +P for writing fiction.

What is +P Ammunition?

The “P” in “+P” stands for “pressure.” The “+” represents, well, you know, a “plus.” Put it together and you’ve got “plus pressure,” as in more pressure. That refers to the extra pressure the cartridge exerts on a firearm as it’s fired. That comes from more or different propellant (aka gunpowder) versus standard ammunition.

This extra pressure makes the projectile (bullet) travel faster. The increased speed means more penetration upon hitting a target, which (depending on who you ask) translates into a higher likelihood of inflicting damage serious enough to stop a threat, such as an attacker. That can be good for an experienced shooter, but the downsides are added recoil and muzzle flash (the fire that can be seen exiting the barrel upon shooting).

As such, +P ammunition falls exclusively into the self-defense domain. It’s not for sport shooting or target practice, like wadcutters.

How is +P Ammunition Different from Magnum Ammunition?

If this sounds a little like the definition of magnum ammunition from the other day, you’re not far off. They’re similar, but I wouldn’t use them interchangeably. “Magnum” might refer to a cartridge’s projectile and/or propellant, but “+P” refers only to the propellant. Usually. (There are no 100 percents in guns.)

If this is confusing, think of +P ammunition as an athlete with a new pair of shoes. The new shoes won’t change the athlete, but it can add another layer of performance where it counts.

Here’s a velocity comparison from ChuckHawks.com that explains what I mean. “Fps” stands for “feet per second.” Note how the +P versions travel faster. The grains refer to the weight of the bullet.

Which Firearms Use +P Ammunition? 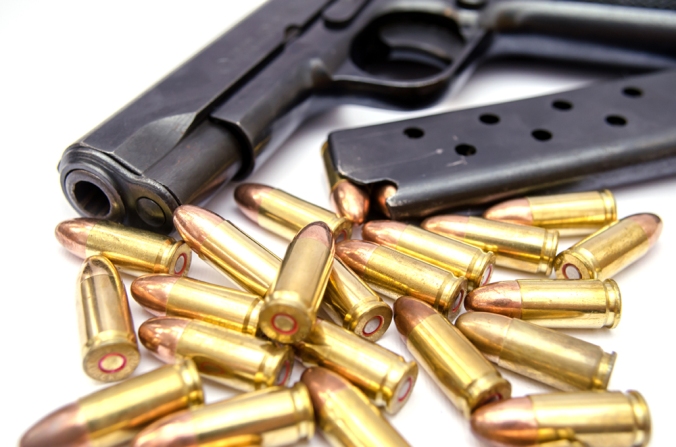 When writing fiction, consider handguns the exclusive domain of +P ammunition, although some rifles do use it. (Shutterstock photo)

Ninety-five percent of the time, +P ammunition is used in handguns, so consider that the rule of thumb (rifles are the other five percent). Not all handgun ammunition is offered in +P, though. Here are the most popular calibers:

Unlike magnum ammunition, +P ammo will usually fit into a firearm without much hassle. Your character with a beloved 9mm pistol should be able to use +P ammunition without switching guns.

Why is Any of This Useful to Writing Fiction?

As jimping is to knives, +P is a helpful shortcut for describing a character’s self-defense ammunition. It’s easy to get snagged on terms like “hollow-point ammunition,” “full metal jacket,” “magnum” and the like. If your character needs to put the hurt on someone, writing in +P ammo is a one-and-done proposition.

That’s on top of the fact that +P barely comes up in fiction. You’ll look extra jazzy by dropping in a reference.

In the real world, law enforcement officers are most likely to use +P ammunition, although it’s available to anyone. Your character probably won’t run into legal restrictions.

Do note that standard, hollow-point, full metal jacket and other types of ammunition can be +P. Just don’t write in “+P magnum” ammunition. That looks weird. Here’s an example of the right way to do it: “Maynard fired his .38 revolver loaded with +P ammo, killing the disgruntled squirrel-human hybrid before it had a chance to eat another pair of his peanut butter-flavored edible underwear.”

What is +P+ Ammunition?

When researching, you might come across “+P+” ammunition. That refers to a version that packs even more pressure, and therefore higher velocities, than its +P counterpart.

2 thoughts on “Like Magnum, But Not: What is +P Ammunition?”