TLDR: There are too many variables to call a definite yes or no, but any rifle from a .223 on up at a distance of 100 yards or less stands the best chance of penetrating a typical vehicle. This is a good time to mention my disclaimer.

It makes sense that characters hiding from gunfire would choose to skirt death by taking shelter in or against a car or truck. But how well do everyday vehicles, such as the kind you whittle away your life inside stuck in traffic, stop bullets? Much depends on the firearm, the ammunition and the make of the vehicle, so the answer isn’t going to be concrete. Here’s my shot at filling in the Swiss cheese.

Some Ammunition Works Better than Others

The type of ammunition the shooter is using in a story matters a great deal. Some ammunition is designed specifically to punch holes through vehicles, light aircraft, buildings and other forms of shelter.

I recall a friend working for a major ammunition manufacturer telling me about a request from the U.S. military. A special ops group needed a particular type of bullet (i.e. the projectile) strong enough to reliably blow in and out of a vehicle while passing through any occupants inside. That contract request probably triggered a special run of ammunition just for that purpose.

That’s a world apart from the ammunition for sale at civilian sporting goods stores. The bullets available typically aren’t hardened to the point where they can be counted on to punch through a vehicle. That isn’t to say it’s a good idea to fire a gun at a vehicle. It’s not. It’s just that, like anything else, ammunition is designed with a specific purpose in mind.

The caliber of the gun, distance, whether the vehicle is moving and the character’s shooting abilities all play important factors, too.

Some Vehicles Are Tougher than Others

On the plus side, the bullet holes won’t affect its resale value. (image via sxc.hu)

The 17-year-old Honda Civic parked in my driveway (laugh it up, jerks, it still runs like a top after 250,000 miles) is probably not a great choice for stopping any type of projectile, be it a bullet or an errant corn dog. A semi built like a tank, on the other hand, will shrug off everything from firearms to a herd of cattle. Specialized vehicles with the latest ballistics materials are even better, but this post is about more typical models.

Don’t focus on just the metal components. Remember that most vehicles, even the large trucks, use run-of-the-mill windows. If a character isn’t crouched behind a metal part, the windows might be a better spot to aim.

As far as shooting out a gas tank for a Michael Bay style explosion, that’s not likely to happen. I cover that in more detail in my book, The Writer’s Guide to Weapons: A Practical Reference for Using Firearms and Knives in Fiction.

It Isn’t Always About a Direct Hit

Bullets can ricochet, send shrapnel flying and cause all sorts of unintentional damage. Don’t count those factors out of a scene. A direct hit might not be necessary if a shred of car door or glass shard lodges itself into a character’s throat. 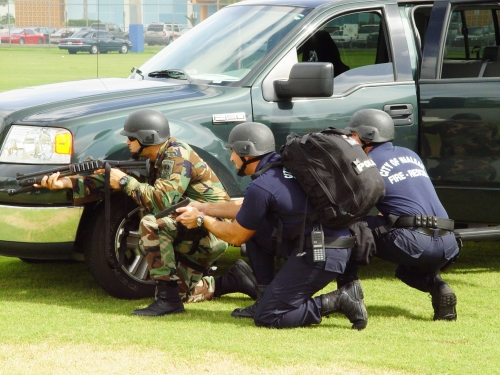 Lofland wrote that typical car doors are like “melting butter” when hit with bullets from .223 rifles. (Image by tome213 via sxc.hu)

Lee Lofland is a retired law enforcement officer and fellow author at Writer’s Digest Books of Police Procedure and Investigation (highly recommended). He recently wrote a post about officers taking shelter from gunfire behind their vehicles. His verdict is that even a police car isn’t going to provide guaranteed protection against any firearm, although some shelter is better than none.

I encourage you to read the entire post, but here are some key takeaways:

Best Firearms for Penetrating a Vehicle

I hesitate to put a solid rule on this, but I’ll peg it this way: If a character is using a rifle equivalent or greater than the following calibers at a distance of 100 yards or less, then the shot should be able to penetrate most vehicle components:

That’s not an exhaustive list of calibers, but it should be a good starting point. Some of the more powerful calibers will be effective at ranges beyond 100 yards.

For shotguns, I’d say slugs (unlike BBs, a slug is a single projectile fired from a shotgun) fired at a range of 50 yards or less should be able to penetrate most vehicle components. I don’t have data backing that up, but this seems reasonable to me. Maybe a reader can leave a comment with more information about shotguns and vehicles.

Where Should a Character Hide?

If your fiction featured a gunfight involving vehicles, how did you handle the action?

One thought on “How Well Can a Typical Vehicle Stop a Bullet?”