This is what happens when you don’t tip your mall Santa. (Photo by Thomas Ricks via sxc.hu)

I don’t know about you, but this Christmas I’ll be getting the shotgun out and leaning it against the wall next to my pillow. Call me paranoid, but ever since I became a father, there’s something exceptionally unsavory about some random creep coming down the chimney. I used to leave out a jug of whole milk and a bale of lard cookies to tempt the oaf into an slow diabetic death, but I don’t have the time to wait around for a case of the sugars any more.

That means Santa Claus needs to go in armed with more than candy canes and reindeer jerky this year. But with what?

Perfect for the disembodied hand on your list, too.

My book, The Writer’s Guide to Weapons: A Practical Reference for Using Firearms and Knives in Fiction, is a good place to start. It lists step-by-step directions for matching guns and knives to characters. It also makes a great Christmas gift for the writer on your list (sorry, I couldn’t help myself).

The following is lifted from that step-by-step process. I’m giving ol’ Saint Nick a knife because he’s all about stealth, but this template could be used for any character.

The book offers more details about these steps, which basically spit out a knife recommendation after you plug in certain attributes.

Step One: What is the Role of the Character?

Santa Claus is a “benevolent” elf who travels by sleigh and breaks into homes to  delight children with  handmade toys that will promptly be forgotten in three days when the batteries run out. His mug is featured on the currency of exactly zero countries.

Step Two: How Will the Knife be Used?

Santa Claus’s knife will be used for self-defense, or not if I can get the drop on him this year. He won’t know what hit him.

I think he’ll also use the knife for intimidation to keep the reindeer and elves in line. Seems both are trying to organize into labor unions, and Santa isn’t about to let a bunch of uppity wage workers eat his margins without a reminder of who has the corner office and who shovels reindeer shit.

Scabs are standing by just in case. (Photo by Linda DuBose via sxc.hu)

Step Three: How Hard Will the Knife be Used?

Between his generous gut and ability to contort his joints for descending chimneys (these should be mutually exclusive but aren’t thanks to the magic of the Christmas Spirit, which I think is a type of booze), Santa’s body is pretty wrecked.

I don’t think he’ll use his knife all that hard. Light duty only, please, although that might go against the purposes of the knife in the first place.

Step Four: How Much Does Stealth Matter?

One of these two is ol’ Saint Nick. The other one is wearing a hat. (Public domain image via Wikimedia Commons)

Quite a bit, actually. On top of his covert missions to deliver holiday cheer, the element of surprise is Santa’s number one advantage.

And if you don’t believe me, you’ve never walked to the bathroom in the middle of the night only to find some random guy already on the can (there isn’t a porta potty on the sleigh).

Step Five: How Skilled with Knives is the Character?

The traditional take on Santa Claus wouldn’t peg him as a knife expert, but I’ll take the opposite view. His younger days as the village drunk meant he learned early on how to plant a blade, first as the one taking the cut and later as the one delivering it.

Step Six: Use the Previous Five Attributes to Select a Knife Type

This step is listed in more detail in the book, but I’ll skip ahead and identify these types of knives as candidates:

So which of the three types is the best bet? It’s up to me (or you, in the case of your characters).

The Verdict: A Straight Razor for Santa Claus 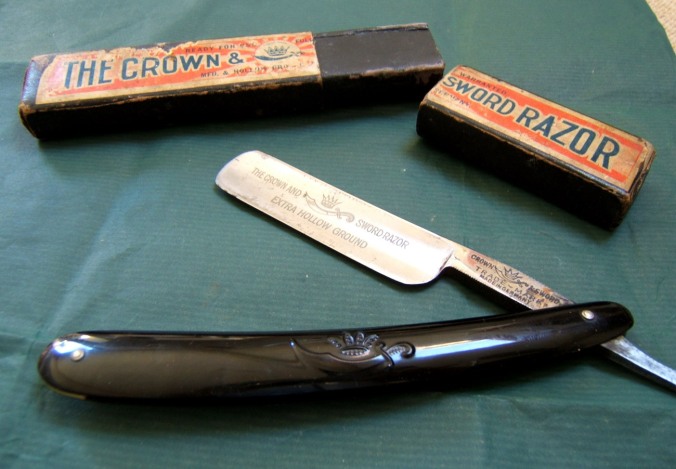 Take a good, long look. The suspect was last seen using this razor. (Photo by Antiek Scheermes via Wikimedia)

I’m going with the straight razor, which isn’t technically a knife but works given the context of this process. Like any good weapon selection, a straight razor serves as an extension of the character. It’s not always about putting the hurt on others in the story. It’s about being sneaky and unassuming in the worst ways.

Given Santa’s beard, I’m betting a straight razor doesn’t get a lot of work at the North Pole, meaning it’s available. There’s something sinister about a mundane object being used for nefarious purposes in the same vein as someone like Santa Claus having an evil streak. A straight razor is lightweight, portable and simple to use, making it ideal for a  holiday superhero on the go.

Plus, once he finally earns himself a spot on the FBI’s Most Wanted List, Santa can shave his beard with the razor as part of his new identity: Filmore Bernardo, freelance tax accountant. Are your books on the IRS’s naughty or nice list? Give Filmore a call for a free consultation today.

It’s all detailed in my e-book, Maynard Soloman Proves Santa Claus is Real. I highly recommend it for the cynical Christmas grinch you turn into each December. You can pick up a copy at these fine e-book retailers:

3 thoughts on “Step by Step: Choosing a Knife for Santa Claus”