There’s something exceptionally brutal and timeless about using nails for nefarious purposes in fiction. (Image by Maare Liiv via sxc.hu)

It must be nail gun season, because this is the second post of the week related to these tools in fiction. Up now is Graham Smith, a terrific crime writer from Scotland, to provide some context for using nail guns on characters in fiction. In addition to writing books, Smith has a background in using nail guns professionally (for less sinister purposes, of course).

On Writing Nail Guns as Weapons in Fiction

Ben has it nailed.

I read with interest Ben’s post on the use of nail guns as weapons. As a former carpenter/joiner, I used to use various nail guns. Everything he said in the post rang true with my experience of them. They are unwieldy, have a safety mechanism to prevent misuse and are generally only effective at very short range.

I couldn’t not include this pic of an M16/AR-15 souped up with nail gun parts that went viral a few years ago. The “Dewalt-16,” as it became known, is just a gag, though, not a real product. What Smith talks about in this post is more in line with reality. ~Ben (Image via gunsholstersandgear.com)

Since turning my hand to writing, I have tried to incorporate some of the everyday tools I used into my novels and short stories, as a lot of the tools range from dangerous to downright deadly. Plus, I feel it’s much more dramatic to use everyday objects in the wrong way than it is for someone to just pull out a gun and start shooting.

My debut novel, Snatched from Home, features kidnappers who threaten to amputate limbs using an oxy-acetylene torch, whereas my forthcoming novel, I Know Your Secret, sees a priest crucified to the stone floor of his church.

You’re probably thinking “how do you knock a nail into a stone floor?” If you’re not, you should be. 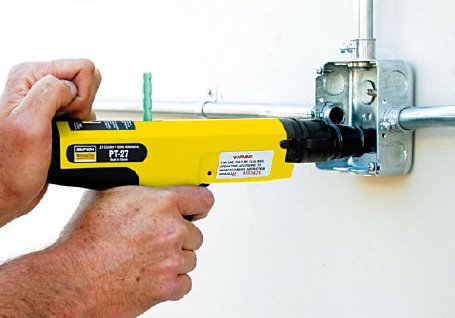 This Simpson nail gun is similar to the one Smith describes. Characters using a powder actuated nail gun (that means it uses gunpowder as a propellant to drive the nail) have an advantage in portability compared to pneumatic tools that must be attached to an air compressor. However, ammunition capacity (i.e. the nails) is reduced.  ~Ben (Image via Amazon.com)

Back in the days when I got dirty at work, I frequently used a special kind of nail gun which used gunpowder to fire a hardened nail into reinforced concrete, steel girders or just about anything you aimed it at. The ones I used were manufactured by Hilti and came in a variety of styles depending upon their age.

The first one I used (Hilti DX 450) had a strip of cartridges which contained gunpowder. These were fed into a slot. Then you would drop a nail, point first, into a loading mechanism, which you then pumped down the barrel. This process was similar to loading a musket. To fire this gun you would place the end of the barrel against whatever you wanted to nail together. You then had to apply seven pounds of pressure to release the safety mechanism. Upon pulling the trigger the gunpowder would be ignited. firing a bolt which drove the nail into its intended target.

I feel it’s much more dramatic to use everyday objects in the wrong way than it is for someone to just pull out a gun and start shooting.

~Graham Smith, author of Snatched from Home and the forthcoming I Know Your Secret

These nail guns were cumbersome, heavy and after a day’s use your hand would ache from absorbing all the kickbacks. Over the years I would use them to fire a three-inch nail through a two and a half inch piece of timber into a steel beam or into reinforced concrete. 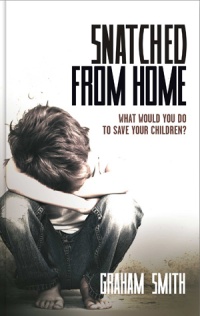 “Snatched from Home,” a crime novel by Graham Smith, is available now from Caffeine Nights Publishing.

So powerful are these guns, the nails came equipped with a washer which caught on the bulbous head and prevented the nail passing clean through the timber. In fact there are several different strengths of cartridges and a gauge on the gun itself so the power of the shot could be tailored to the job in hand.

Nowadays there are many variations of this gun and most have a type of belt feed which houses 10 nails to match the 10 powder cartridges. In my experience, there’s no way any example of this type of nail gun that could be used as a weapon unless the target was stationary enough for the necessary seven pounds of pressure to be applied.

Nail Guns: Better Used as Clubs than as Firearms

If the target isn’t stationary then the gun is more effective as a weapon if used as a club or thrown at the target. (I wouldn’t recommend throwing a loaded one, though.) Not only that, but the nails – in all their various forms – are not at all aerodynamic, and there’s no rifling inside the barrels to aid accuracy.

Therefore the chance of accurately hitting your desired target at any kind of range beyond 20 feet would be unlikely in the extreme.

When I’d made the decision to crucify a priest in I Know Your Secret, I knew that I had to make it somewhat unique, as I’ve read about the crime before. To achieve this, I decided to use a Hilti nail gun as my killer’s weapon of choice.

Not only would it do the job required of it, unlike more conventional pistols and other guns, but there’s no way to trace a specific Hilti gun to a specific crime. Plus, among builders they are a common tool which most construction firms will possess. This also allowed me to affix said priest to the stone floor rather than a cross or a door, which is what had featured in the books I’d read. It also allowed the kill to be a one person job as I’d imagine it’d be quite difficult to hold the victim in place, the nail against their hand and still be able to knock the nail in with a hammer.

This just left me with one problem. A gun which could nail wood to stone or steel would shoot its nail straight through flesh and bone without pause. There’s also the chance the gun’s bolt would follow through to the extent the gun was unusable. (Washers inside them have to be regularly replaced.)

To counteract this, I simply had my killer use small plywood pads to offer resistance to the washers on the nails and hey presto! I had myself a crucified priest.

When I started using Hilti guns, they were the only gunpowder-using gun in the UK that users didn’t need a license for. Nowadays, this has changed because they have been rightly recognized for the dangerous weapons they are.

(Note from Ben: Although some firearms laws in the U.S. might apply to nail guns depending on interpretation, to my knowledge there hasn’t been an effort to regulate them like traditional guns in earnest. U.S.-based characters have more leeway in this area.)

Graham Smith is married with a young son. A time-served joiner, he has built bridges, houses, dug drains and slated roofs to make ends meet. For the last 14 years he has been manager of a busy hotel and wedding venue near Gretna Green, Scotland.

An avid fan of crime fiction since being given one of Enid Blyton’s Famous Five books at the age of eight, he has also been a regular reviewer and interviewer for the well-respected website Crimesquad.com for over six years.

2 thoughts on “On Writing Nail Guns as Weapons in Fiction”