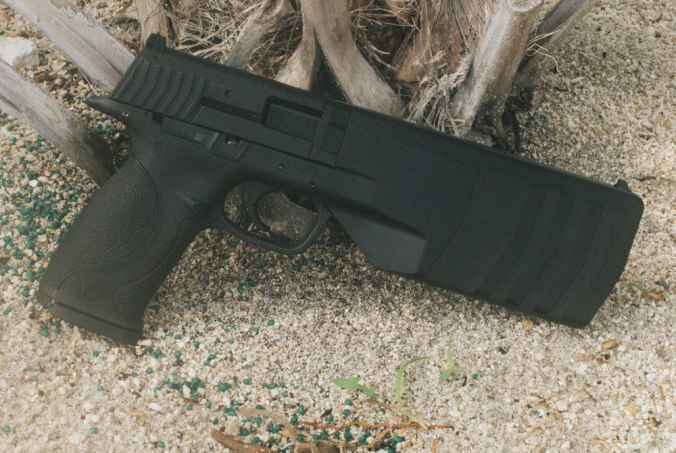 The Silencerco Maxim doesn’t look like other pistols because it isn’t. (Gun Digest photo)

Fiction has a hard time with this whole business of silencers (aka suppressors, if you want to look smart), so I’d like to draw your attention to something that’s going to make everything a helluva lot easier.

A Pistol with a Built-In Suppressor

Silencerco normally manufacturers suppressors, but last year it unveiled the Maxim 9mm semi-automatic pistol for release in 2016. What makes the Maxim different is that it sports a built-in suppressor. From the GunDigest.com article:

The Maxim is built on a Smith & Wesson M&P C.O.R.E. chassis, and it uses M&P magazines. At a glance, the new handgun looks like it belongs in a sci-fi movie. Well, the suppression portion has to go somewhere, so now it sits mainly beneath the barrel instead of hanging off the end.

Here it is in action:

Why You Should Care for Writing Fiction

If you’re interested in learning more about the technical side of this new firearm, head to the Silencerco website for more information.

For the rest of you writerfolk, know that there’s a simple route around the question of whether a pistol, rifle or shotgun (but probably not revolver) would use a suppressor. The answer can be yes every time, since this built-in technology is now a reality. The character doesn’t have to use the Silencerco Maxim necessarily, though. An “experimental model” will do fine enough. This stuff exists. End of story. (Or maybe the beginning, depending on where you are with things.)

The legalities, on the other hand, are another question. Since the 1930s, the National Firearms Act requires every civilian to pay a federal tax and jump through several legal hoops before gaining clearance to purchase a suppressor. (Note: individual states may choose to allow or ban suppressors, while the federal government does not explicitly forbid them.)

Does that change if the suppressing mechanism is integral to the firearm itself? I’m not sure, but I’m willing to bet the ATF will err on the side of treating a product like the Maxim the same way it does any other suppressor.

This means any character seeking to purchase a firearm with a built-in suppressor will need to be able to pass the full scrutiny of local, state and federal governments. Few items in the firearms world are as regulated as suppressors.

Now would be a good time to mention some required reading if you’re going down the suppressor route:

5 thoughts on “A Handgun with a Built-In Silencer?”