TLDR: No one can say what the future holds for 3D-printed guns, but the possibility of printing off weapons at home is a great avenue for fiction to explore.

Like smart guns, 3D-printed firearms are an emerging technology that’s perfect for speculation when writing fiction. This is an area of firearms the real world isn’t yet sure about. With the proliferation of 3D printers across the consumer market, you can bet 3D-printed firearms will be showing up in fiction sooner rather than later.

What is a 3D-Printed Gun?

The gist of a 3D-printed gun is pretty simple. Using a 3D printer, thin sheets of plastic are layered to create firearm components. Those are then assembled into a functioning firearm, assisted by separate metal components. Making everything work correctly without injuring the shooter is the tricky part.

That’s a 3D-printed model called the Liberator in the video above. Created by Defense Distributed, it became the world’s first 3D-printed gun in 2013. Although it’s safe to say there was some tinkering prior to 2013, use that year as the earliest 3D-printed gun reference in your writing.

As you can tell from the video, the Liberator isn’t exactly eye-catching. You’ll also notice the shooter is tugging at a string to pull the trigger, since losing a finger probably wasn’t on the agenda that day.

Since the Liberator, many other models hit the market (or non-market, since the tech to make these things is all open source). There are 3D-printed .22 caliber handguns, .22 rifles and AR-10s (similar to AR-15s), among others. Here’s an example of what’s called the Imura Pistol v2.0, a .22 revolver, via PrintedFirearm.com:

Printing out complete firearms isn’t the only benefit to this technology. Another comes in creating custom components for existing firearms. That most often includes the parts that make the gun tick, such as the action (the mechanism inside the gun that fires and cycles ammunition). These components are printed using plastic or metal. In fact, a complete firearm printed from metal has already been created.

As you can guess, that leads to some…

Federal, state and local governments haven’t reached a consensus on how to regulate 3D-printed technology. There are a host of legal issues that could apply, but I’ll highlight two.

First is the issue of whether it’s legal to freely distribute downloadable files to create 3D-printed guns. This is as much a First Amendment issue as it is the Second. Defense Distributed ran into this when the U.S. State Department demanded it take its blueprint files down. That resulted in a lawsuit filed in May 2015 that you can read about here.

The other issue is whether plastic 3D-printed firearms can be categorized as “undetectable” when going through a metal detector. Although they’re made mostly out of plastic, these guns still use metal firing pins (that’s the part of a gun that strikes the ammunition in the primer, which ignites the propellant). They also use ammunition made from various metals. 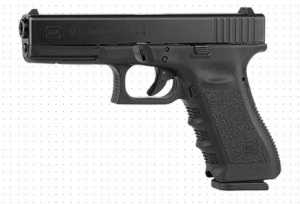 Despite the UFA, the Glock 17 went on to become one of the most popular semi-automatic pistols of all time. It’s a great go-to pick for your characters. (Image via Glock)

The question becomes this: If the plastic parts of a 3D-printed gun would get through a metal detector, but the firing pin and the ammunition will not, should the firearm be considered “undetectable?” The answer is important because of the Undetectable Firearms Act (UFA). Passed into federal law in 1988, the UFA prohibits civilian possession and manufacture of firearms able to avoid metal detectors.

Although 3D printing might be new, the question of plastic in firearms is not. The UFA was actually implemented due to concerns of firearms like the Glock 17, which debuted in 1982. The Glock 17 used many plastic components, but it wasn’t able to skip a metal detector. The concern at the time, however, was that a fully undetectable firearm was on the horizon. That never came about, but it didn’t prevent a 10-year extension of the UFA at the end of 2013, this time with an eye toward 3D-printed guns.

Legalese aside, the biggest drawback to 3D-printed guns is the reliability. Watch the first 30 seconds of this video to get an idea of that. “Please don’t shoot it here,” the guy off-camera at the range says to the shooter with the 3D-printed gun.

I’ve never shot a 3D-printed gun, but I don’t blame the guy for saying that. When it debuted, the Liberator was a one-shot-only deal. The plastic parts couldn’t hold up to the pressure of exploding gunpowder. They either busted apart or melted. The tech, especially in the metal printing department, appears to have gotten better. When even traditionally manufactured firearms made in factories can fail, is it too soon to say this tech won’t blow your hand off? I’d say so.

The thought of someone printing out a gun or components at home might make some people uneasy. Those concerns are reasonable, but let me toss something out there to gnaw on. Customizing firearms, as well as building them, is nothing new. People made those same 3D-printed parts for ages in their backyards, except they did it the old-fashioned way by machining metals or other materials. In fact, if you’re not selling or distributing anything, you don’t need any government approval to do so (depending on the project).

What’s the difference between that and programming a printer? Is it in the ease of use? I couldn’t say how easy they are to make, since I’ve never made one. Is it because of the sharing over the Internet of blueprint files to make firearms? Maybe, but people have passed firearm information to each other without government interference for a long time, too.

I’m not going to tell you what to think about 3D-printed firearms, but I think these are questions any 21st Century writer or publisher should consider. This isn’t an issue all that different from e-books, digital music and other media.

As mentioned before, I take the same view with 3D-printed guns in fiction as I do with smart guns. This is ripe territory for futuristic speculation. But don’t limit characters to just guns. What about knives? Ammunition? Melee weapons? Could a high-tech character print out everything for a mission from a secret hideout? Exploring these questions in fiction is less risky than trying this stuff out for yourself.

If you’re interested in researching more about 3D-printed guns for your stories, start with this documentary.

2 thoughts on “What are 3D-Printed Guns?”