There’s merit to this trope, but it’s important to understand the circumstances. (Shutterstock photo)

TLDR: Yes, but only under the right conditions.

Friend of this blog Ralph S. wrote me recently with this excellent question:

Sometimes in reading crime fiction, I notice that writers frequently depend on a system of firearms registration to help the detective find out who owns a particular gun, or maybe to track the ownership of a firearm. But does such a system of registration actually exist in the USA? My guess is that some such systems may exist, but that they are geographically spotty, and that some writers may be making false assumptions. How should writers handle this problem? END_OF_DOCUMENT_TOKEN_TO_BE_REPLACED

The attacker ran away after the protagonist pulled a knife. The protagonist probably shouldn’t chase after the bad guy into a dead end and slit his throat. That’s murder. If that matches the character’s path in the story, go for it. However, it’s easy to overlook how quickly the “good guy” in a story can do some bad things that might be out of character. (Shutterstock photo)

TLDR: Using a knife for self-defense can put a character on some shaky ground. The best tactic, legally speaking, is to inflict an injury that allows for a retreat when one is otherwise not possible.

It’s a lot of fun to choose knives for characters. I played the part of armorer for a vigilante detective character not long ago, and I enjoyed the hell out of it. The blades in that instance (I recommended two for the character) were to be used for last-ditch self-defense. I stopped short, however, of detailing what self-defense with a knife can mean in a legal sense.

Maybe this matters to a story and maybe it doesn’t. But if you’re going to assign a character a knife, don’t disregard how easy it is for a knife-wielding character to cross the line from self-defense to murder. END_OF_DOCUMENT_TOKEN_TO_BE_REPLACED

Since starting this blog and my other projects, I’ve moved away from the book reviews that initially were my bread and butter. But then along comes a book like Knife Laws of the U.S., and I can’t let it pass by without getting the word out to writers reading this blog.

Written by one of the foremost Second Amendment attorneys in the country, Evan Nappen, Knife Laws of the U.S. details exactly that. Whereas my book, The Writer’s Guide to Weapons, offers a crash course on this subject, Nappen’s work picks up where I left off, then runs a mile with it. This is the premier resource to turn to when assigning knives to characters if the laws of the setting count. END_OF_DOCUMENT_TOKEN_TO_BE_REPLACED

TLDR: No one can say what the future holds for 3D-printed guns, but the possibility of printing off weapons at home is a great avenue for fiction to explore.

Like smart guns, 3D-printed firearms are an emerging technology that’s perfect for speculation when writing fiction. This is an area of firearms the real world isn’t yet sure about. With the proliferation of 3D printers across the consumer market, you can bet 3D-printed firearms will be showing up in fiction sooner rather than later.

END_OF_DOCUMENT_TOKEN_TO_BE_REPLACED 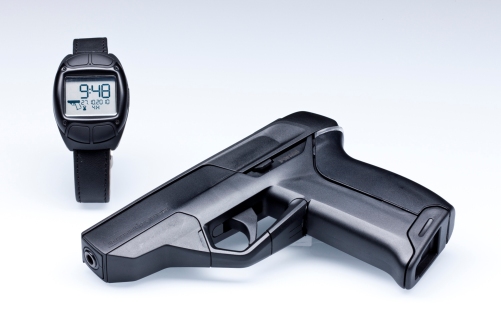 Smart guns use a variety of tech to prevent unintentional use. This German-made Armatix iP1 will only fire if its accompanying watch is within range. The semi-auto pistol itself holds 10 rounds of .22 caliber ammunition. (Armatix photo)

TLDR: Smart guns use emerging technology to limit their use to pre-approved people and/or places. Feel free to explore them in fiction, but don’t expect to see them in reality all that much.