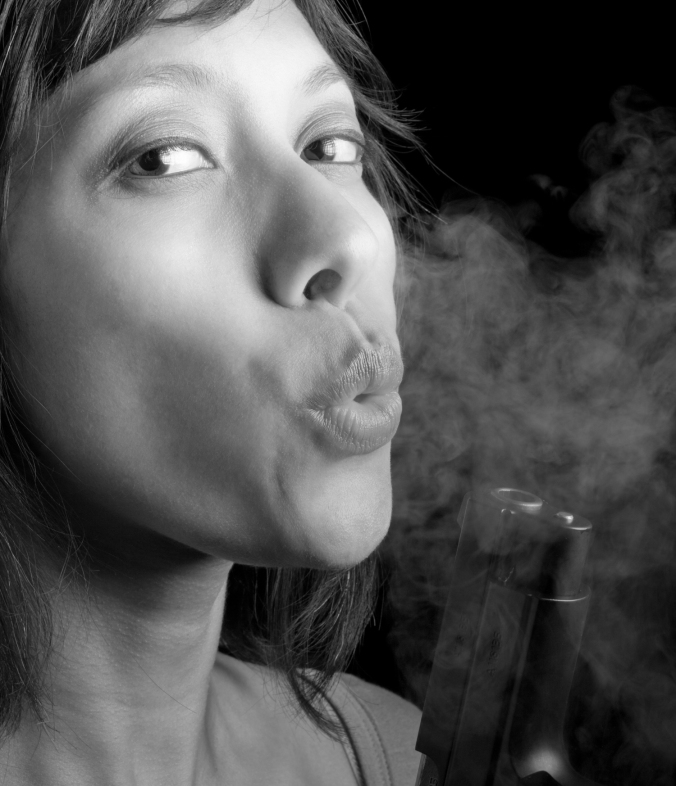 Why do characters in movies, TV shows and (sometimes) books blow smoke from the end of their guns’ barrels after a shootout? Also, is this person blowing away the smoke or sucking it in? Is this a hookah by way of a pistol? Is that even possible? Asking for a friend. (Shutterstock image)

TLDR: This trope serves no practical purpose with modern firearms, but it did play an essential role many years ago.

I hate to break it to you, but much of the “cool factor” surrounding guns in fiction is based on what looks cool. Take away the arbitrary cool factor, and firearms are pieces of nerdy metal, square chemistry, dad jean physics and Nickelback designs. On their own, they’re boring. Just try talking to one.

It takes someone or something else to make them “cool.” One way characters in fiction do that is by blowing the gun smoke away from the barrel after an intense volley of gunfire, usually but not always involving a handgun. The website TV Tropes even has a page dedicated to this cliche.

Is there any point to this trope or is it just blowing smoke? Let’s break it down.

Although they use modern propellants that burn much, much cleaner than the blackpowders of antiquity, today’s guns use ammunition that still leaves residue in the barrel after a shot is fired. Shoot several times in a row, as a character would during a gunfight, and enough residue will build up to start smoldering inside that hot barrel.

The more the gun is fired the hotter the barrel becomes, and the more smoke you’d expect to see (although this depends on many factors, such as the quality of the ammo, the gun model, the craftsmanship of the firearm, etc.)

In extreme cases, residue and heat can build up to the point where the barrel actually catches on fire. Allow Exhibit A to demonstrate this effect while practicing his rights to bare arms:

The above is an extreme case, as in “oh, shit, the Canadians are invading and I have to take on the RCMP by myself.” War is different, and allowing a firearm to cool might be necessary to prevent a mechanical failure. This may involve blowing on the barrel, but that’s an exception, not the rule.

Everyday shooters, even police officers, don’t worry about their guns catching fire in that way. If their barrels get smoky, they can let them air out without worrying about hosting an impromptu barbecue.

Therefore, there isn’t much point to blowing that smoke from the barrel provided the firearm is modern, or at least uses modern ammunition.

How modern? Let’s put the rule of thumb at today back to the 1890s, when smokeless powders (i.e. the kind of gunpowder that doesn’t leave much residue and therefore doesn’t get as smoky as blackpowder) began proliferating around the world in earnest.

Where This Trope Comes From: The Blackpowder Era

My theory is the barrel blowing trope is left over from the blackpowder days. Blackpowder (i.e. the same type of powder used to fire muskets, the guns you’d recognize from the Revolutionary War) is the old, dirty bastard of firearms. It leaves a lot of hot residue in the barrel and other gun components after a shot.

That hot, smoldering residue can be dangerous when it comes time to reload, a process that involves pouring explosive blackpowder down the barrel (and in the pan, as was the case with flintlock, matchlock and other firearms of antiquity). It’s the equivalent of pouring gasoline on a burnt match. It might not always kill you, but it’s still risky business.

Burning off or extinguishing that smoldering residue before reloading was a good idea. How did shooters do it? You guessed it. They blew down the barrel of the firearm.

Here’s a video of a YouTuber doing exactly that with a Brown Bess musket, which you might recognize if you watched The Revenant.

Here’s my theory: Because blackpowder was around for centuries, the practice of blowing on the barrel ported over into pop culture. My guess is it made the initial leap through western movies in the 1930s and ’40s. From there, it penetrated other forms of entertainment until it became the trope we know it as today.

The Takeaway: Yes, Modern Characters Can Blow on Their Barrels but, No, It Doesn’t Really Do Anything

Unless your story is set during the blackpowder era (the dawn of firearms in China in the 1200s up through the late 19th Century) or involves characters using blackpowder guns, there’s no practical purpose for characters to blow smoke from their barrels.

However, there’s no reason a character using modern firearms and ammunition can’t blow that smoke away. You want to blow smoke, that’s your business, not mine.

And as a friendly reminder should you get the itch to try this at home, it’s not a good idea to put your face at the end of a gun barrel in the first place. Have a friend blow you instead. (er…that came out wrong)

9 thoughts on “Why Do Characters Blow Away Gun Smoke from the Barrel After They Shoot?”