Magazine or clip? Many writers, and people in general, trip up on this area. They almost always reference the wrong one – “clip” – to describe that detachable rectangle that holds ammunition.

It’s OK. I even made that mistake myself in one of the earlier versions of Cleansing Eden, my crime thriller novel. Correcting that mistake was part of the catalyst for my Writer’s Digest guide to firearms and knives.

Here’s the rule of thumb: 99 percent of the time, the correct term is “magazine,” not “clip.” Whenever you get the itch to write “clip,” use “mag” or “magazine” instead.

What’s the difference? Let’s start with appearances. A magazine looks like this. (image courtesy of GunDigestStore.com)

A magazine feeds ammunition into the firearm. Keep that in mind, because it’s an important distinction.

A clip is different in that it inserts ammunition into a magazine, usually an internal one built into the firearm but sometimes a detachable one. The clip feeds the magazine, and the magazine feeds the firearm. That’s the major difference. Here’s what a clip looks like. (Wikimedia image) 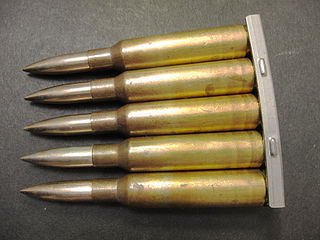 Clips are relatively uncommon today. Most modern pistols and rifles use magazines – either internal or detachable – without the need for clips. By the way, revolvers don’t use magazines or clips. They have chambers inside cylinders that are loaded either by hand, a speed loader or a speed strip. There are, confusingly enough, moon clips that cluster cartridges together for insertion into a cylinder, but these distinctions are a post for another day.

2 thoughts on “Magazine vs. Clip: What’s the Difference?”