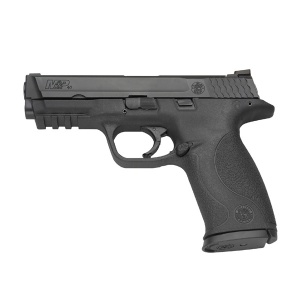 TLDR: There isn’t one “cop gun,” but a .40 caliber semi-automatic pistol is a solid default choice for modern settings.

One of the most common questions about assigning firearms to characters I’ve received through e-mail is, “What’s a good cop gun?” Although law enforcement officers use many types of firearms, this question usually refers to semi-automatic pistols. This post will cover those.

There isn’t a single “cop gun” out there. Manufacturers might design a firearm for law enforcement use, but that doesn’t necessarily mean there’s a separate category of guns just for police officers. They’re simply “guns used by police.”

And what those are usually depends on the financial situation of the police department. Some departments purchase the firearms and issue them to officers. Others provide a stipend along with a few requirements, then let the officers go out and buy a model that suits them. Some small, rural or underfunded departments might place the burden entirely on the officers to make the purchase.

That can make choosing a law enforcement character’s sidearm a little complicated, but fear not. There’s a shortcut.

For present-day settings, a .40 caliber semi-automatic pistol is a great default choice. The .40 is a versatile caliber that sits at the crossroads of practicality and power, and it’s popular with law enforcement in the real world. I confirmed this with the sheriff of Hennepin County (the county that includes Minneapolis, Minn.), Rich Stanek, during a tour of the jail last year.

For another layer of realism to your writing, you might include the use of jacketed hollow-point ammunition. A hollow-point bullet breaks apart upon impact, reducing the odds of passing through a target (like another character). In close-quarter situations, such as the ones where a handgun would be used, this is helpful to lowering the risk of collateral damage.

The “jacketed” in “jacketed hollow-point ammunition” means that the bullet wears an extra coat of metal. This helps penetrate a target deeper than non-jacketed bullets. Because hollow-point bullets break apart and don’t penetrate deeply on their own, and because taking a life might be on the docket, that jacket satisfies both the lethality and pass-through risk reduction requirements. Of course, police officers might use other types of ammo depending on the situation, but what I just described is a good rule of thumb.

If you’re interested in taking your depiction even further, you might mention the model name of the .40 caliber pistol. This list does a great job of running down some of the more popular models.

Here are my top picks for .40 caliber “cop guns.” I included links to the manufacturers’ websites for technical specs if you’re interested: