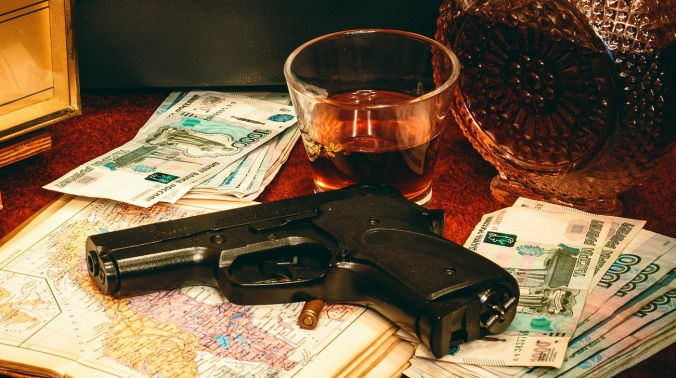 Booze and guns. Booze and swimming. Booze and driving. Booze and burgers. Only one of these options go well together in real life. In fiction, however, these combos can be 100-proof plot lubricant. (Image via Pexels)

Reader of this blog and The Writer’s Guide to Weapons book, Aaron Marshall, is working on a WIP featuring a critical scene involving firearms and alcohol. Here’s the question he wrote to me, as well as my response.

Question: Does Alcohol Increase the Odds of an Unintentional Death Via Firearm?

“I’m an aspiring writer who’s getting pretty close to submitting (what will hopefully be) the first book in a military sci-fi series set in the near future. I received your book, The Writer’s Guide to Weapons, in the mail yesterday and wish to say it’s been really informative so far. I especially appreciate how it explains the way each weapon actually functions, which is something that most reference guides apparently assume the reader already knows.

“I know this may sound odd, but even though I have tons of reference material regarding military topics and weaponry, I have very little hands-on experience with any firearms and no formal military training, so obviously those are obstacles I’ve had to overcome in terms of getting the minutiae correct in my writing.

“Anyway, I have a specific question regarding a particular scene in my book; I want to make certain that it’s even feasible. It involves a boy who, along with his mother, is often violently abused by his stepfather who is a drunkard. The boy is terrified of the man, but his anger over how his mother is treated finally overcomes his fear and he hatches a plot to kill his stepfather.

“The man has come into the house after a night of carousing and laid his guns out on the bed to clean for a hunting trip the next day. After violently shoving his wife into the kitchen counter and cursing her while she weeps on the floor picking up the pieces of some of her favorite dishes (the boy quietly watches this from the hallway), the man stumbles into the living room and collapses into his easy chair.

“Enraged, the boy sneaks into his parents’ bedroom and quietly loads the guns and switches the safeties off.

“Now for the question: how likely is the boy’s plot to succeed in arranging an ‘accident‘ for his drunken stepfather? Are any guns in particular more likely than others to be accidentally set off when his stepdad returns to the bedroom and begins to handle or clean them? The success of this scene depends entirely upon the plausibility that the boy’s plan will succeed; if the function of the weapons would likely prevent them from going off, (or if even a person in a drunken stupor could easily recognize at a glance something was amiss…such as the safeties being off), this scene will fall flat, and I know it. I don’t want to count of the reader’s ignorance of the subject matter to cover for my own.

“I wanted a plot that a child might be able to conceive while at the same time avoiding a direct confrontation with his stepfather. Again, the boy is terrified of this man. There’s also a big part of him that doesn’t want to pull the trigger himself, and he thinks having it play out this way might enable him to avoid the guilt of becoming ‘something worse than his stepdad ever was’ (it doesn’t, for what it’s worth).

“I would greatly appreciate any insights you might offer on this. If the scene is too flawed to work, then I’ll do what’s necessary to adapt.”

Answer: Not Just Feasible in Fiction, but also in Real Life 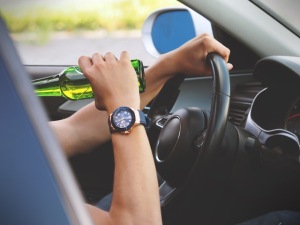 Hard drink and guns: not all that different from drinking and driving. (Image via Pexels)

The scenario you described is absolutely feasible. There isn’t a shortage of unfortunate instances where someone cleaning a firearm in perfect sobriety can negligently discharge a loaded firearm. That usually starts with storing the firearm loaded, forgetting to unload it after use or flat-out ignoring basic safety practices. In any case, the process of carelessly cleaning a firearm could result in a discharge.

Someone in a drunken stupor could easily make the mistake of pulling the trigger on a loaded firearm, regardless of make or model. This is why alcohol and firearms don’t mix! Your stepfather character might even make the stupid decision to look down the barrel of the firearm and accidentally pull the trigger. It sounds dumb (and it is!), but it unfortunately happens.

I think you’re safe to assume the general negligence of a drunkard is enough to do him in. Readers won’t think twice. You wouldn’t have to go into too much detail if you need to give yourself some technical cover, too. It’s enough for the kid to load the guns and wait.

As for the best (or worst?) firearms for this scenario, I’d peg any handgun as being more suitable than a shotgun or rifle on account of the shorter barrels.

Good luck with your WIP!

4 thoughts on “Alcohol and Firearms: Great for Fiction, Bad for Real Life”