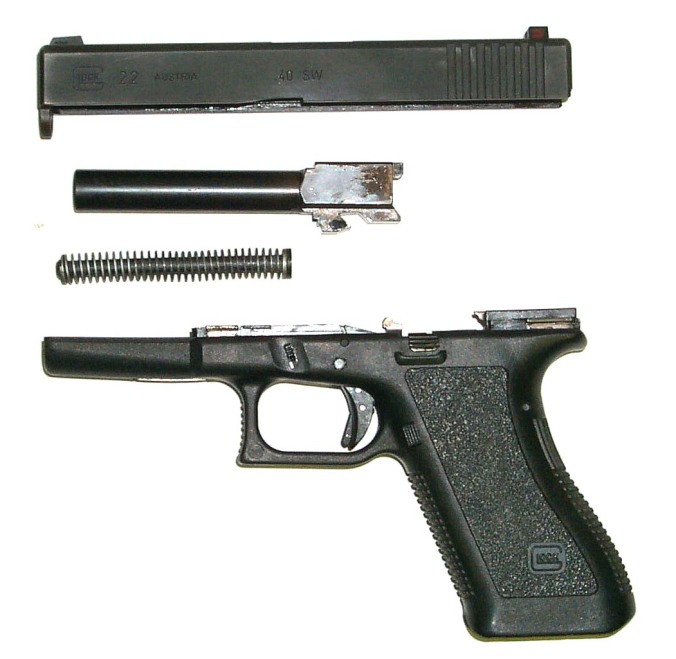 Handguns are some of the most common weapons in fiction. Here are some small selections worth considering that aren’t Glocks. That’s right. Not every pistol in fiction is a Glock. ~Ben (Image by Jon Campbell via sxc.hu)

Following up his post about close quarters combat and clearing rooms, Michael Connick is back with another great guest post. This one is about five small pistols perfect for your story’s protagonist. Enjoy!

From my novel, Funhouse Mirrors:

One of the reasons I hate gloves is that they can slow down my ability to quickly draw a weapon out of a holster and fire it. You see, my right front pants pocket contains a special holster with a Walther PPK pistol in it. I’ve also got a spare magazine for this pistol in my left rear pants pocket.

Less than two years ago, I had used a small pistol carried in just such a pocket holster to successfully defend myself from a psychopathic killer who was a KGB agent. This killer had been determined to end my life, but instead I ended his. To me, this incident was an education in just how easy it would be to lose my life if I ever became lazy and let my guard down. The world of spies in which I now live can be a very dangerous one, indeed.

The story in Funhouse Mirrors takes place in the early 1980s, and the Walther PPK, still made today, would have been considered an excellent choice as a small, easily concealable, handgun to carry for self protection.

Today, writers of modern fiction have an innumerably larger variety of handguns available for arming their protagonists. This truly is a golden age of handguns. 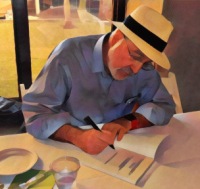 The reason people carry handguns is because they are lightweight and easily concealable, not because they are the most lethal weapon available. More 80% of the people shot with a handgun survive, according to The Wall Street Journal. Shot placement is far more crucial when using a handgun than a rifle.

Your protagonist is going to need to be a good marksman, or very lucky, to kill someone with a handgun. That’s why you will commonly read newspaper stories where police officers have shot someone six or more times. It can easily take that many shots to stop an attacker by using a handgun, much less to kill them. 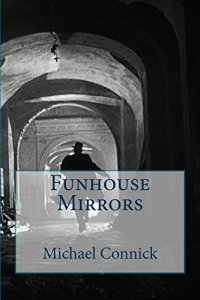 “Funhouse Mirrors” is the latest book from Michael Connick. Click the cover to see more.

The next fact for the author to keep in mind regarding handgun selection is that size definitely matters. Small handguns are experts’ guns. They take a very well-trained and capable marksman to shoot them effectively. The smaller the gun, the harder it is to get an effective grip on it, which is critical for fast and accurate shooting, and the larger the felt recoil will be into the shooter’s hand.

Their short sight radius – the distance between the front and rear sights – makes them harder to aim accurately. Tiny guns are easy to conceal, but harder to use.

The following are five possible handguns, all of which are owned by me. They range from micro to maxi in size and offer a good range of example weapons with which to arm your characters. 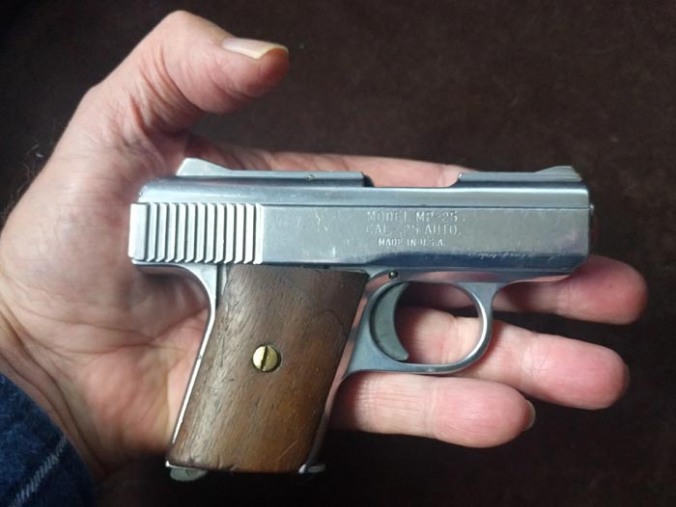 The Raven MP-25 is about as small as it gets. (Image via the author.)

This tiny handgun is the chambered in .25 ACP and is the most concealable of the guns discussed here. It’s also the oldest of the lot, having been manufactured in the 1970s as one of a large group of handguns disparagingly known at that time as “Saturday Night Specials.”

It has a six-round magazine and features a very simple and somewhat crude design, yet is surprisingly durable and reliable if kept clean and oiled. I’ve shot 100s of rounds through mine without a single malfunction. 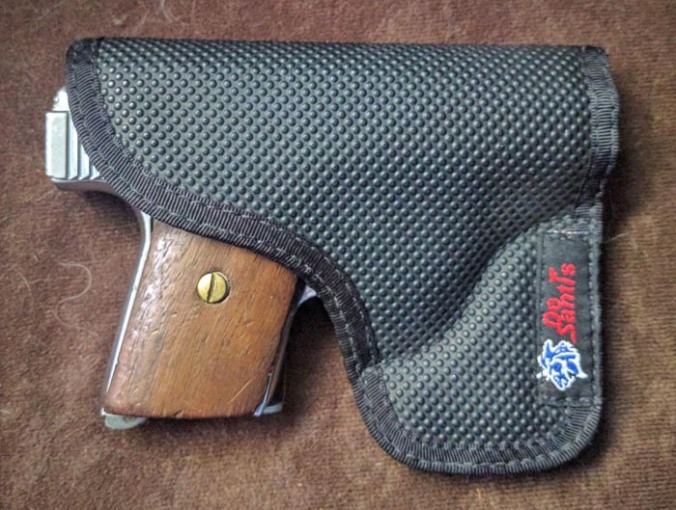 The Raven slips easily into a pocket holster, which is a type of holster (surprise, surprise) designed to be inserted into a pants pocket. (Image via the author.)

They are very cheap to acquire (I paid $50 for mine) and are still popular with low-grade criminals. The tiny bullet they fire is surprisingly powerful. I’ve shot them through car doors and hit targets inside. It’s the ultimate lightweight, small, and cheap handgun. It can be easily be concealed in a pocket holster. 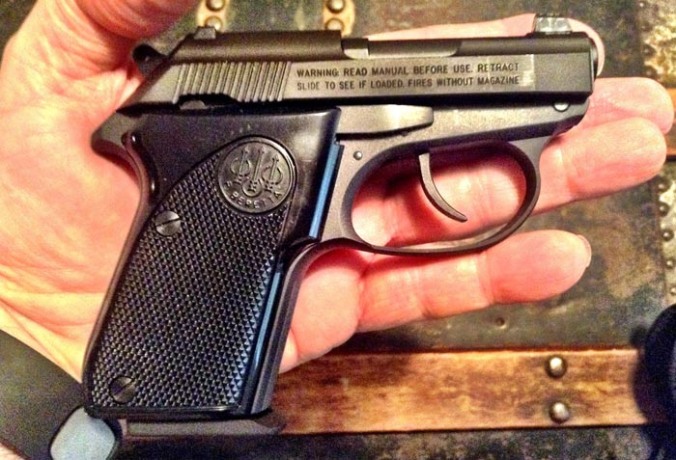 The Beretta Alleycat is a little larger than the Raven. (Image via the author.)

This little handgun is chambered in a slightly larger caliber, .32 APC, and features a seven-round magazine. It also has a completely unique feature: a tip-up barrel. Because of this design, the shooter never needs to rack the slide and can load the first round directly into the chamber of the pistol.

This is great for anyone with poor hand strength, due to age, physical size, or injury. It has great sights for such a small gun and when loaded with the proper hollow point ammunition can actually be a formidable little firearm. 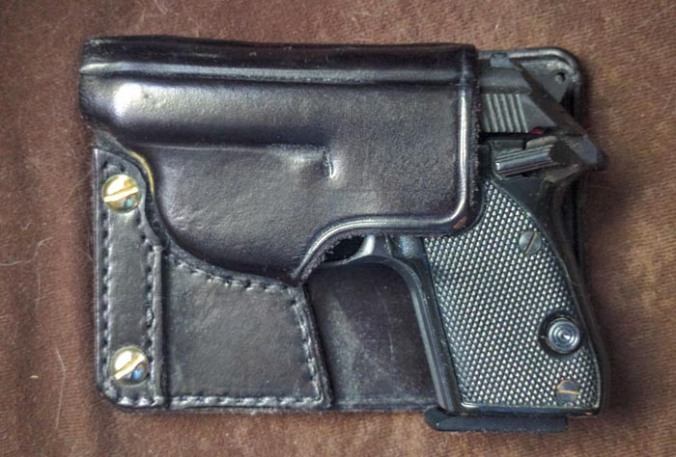 When slipped into a pocket, this holster is designed to give the appearance of a wallet. (Image via the author.)

The pocket holster shown in the above picture provides a unique way to conceal it, as the side of the holster facing the outside of the pocket mimics the shape of a wallet. 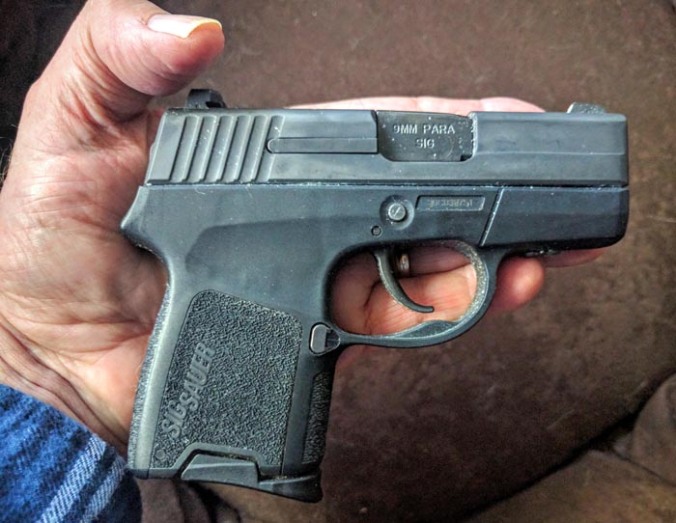 This SIG Sauer is a good choice for a character’s small, 9mm pistol. (Image via the author.)

This subcompact pistol is the most formidable little handgun so far, chambered in 9mm with an eight-round magazine. This caliber is the standard for most law enforcement and military handguns. 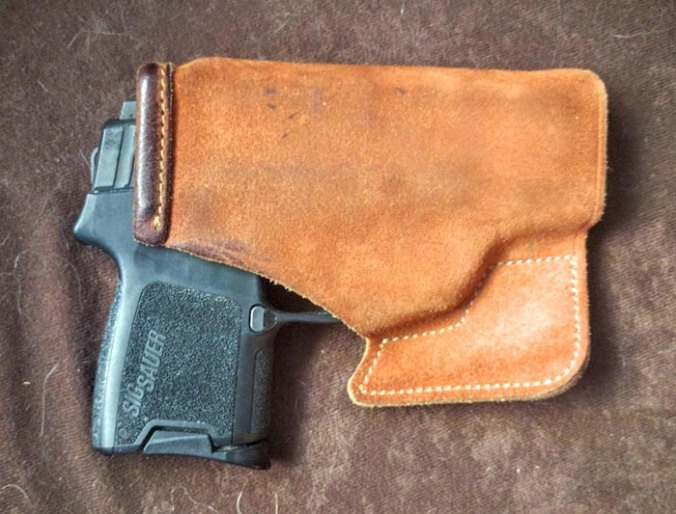 (Image via the author.)

It has excellent sights and is extremely accurate. I’ve actually shot three-inch groups with it at 25-yard targets. It’s small enough to be carried inside a pants pocket.

A Nice Balance Between Small and Large: FN FNS-9 Compact 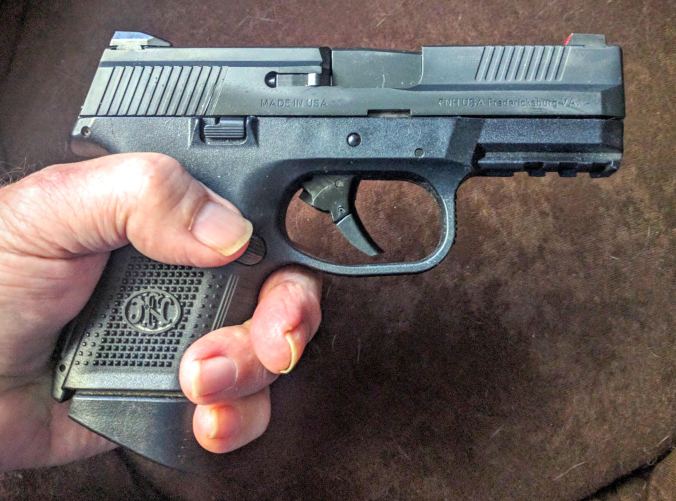 At the intersection of smaller and larger pistols is this FN option. (Image via the author.)

This is my primary concealed carry pistol. Its size provides the best compromise I’ve found between small enough to conceal and large enough to be easy to shoot well.

While not as well known as Glock, FN is a very old firearms manufacturer headquartered in Belgium. FN manufactures most of the rifles and machine guns used by the U.S. military and is known for its high quality products.

The FNS-9 Compact is an extremely accurate handgun chambered in 9mm with 12- or 17-round magazines. I’ve even successfully shot it in USPSA and IDPA competitions. 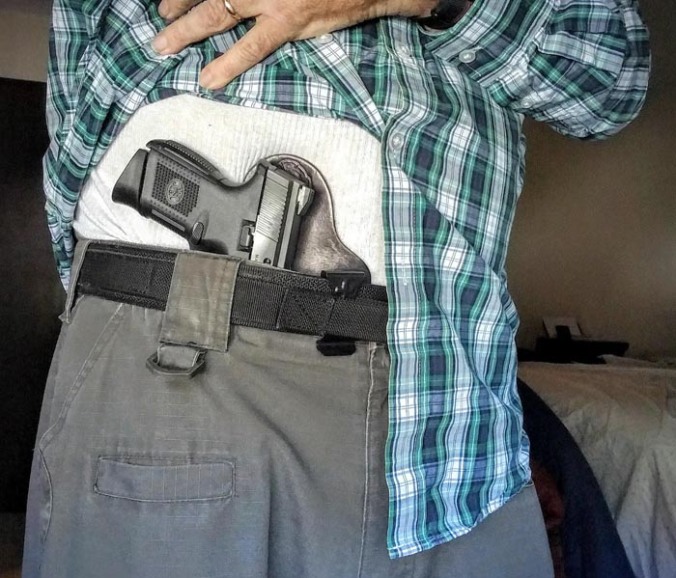 Characters in need of a concealed carry option that fits inside the waistband might go with the FNS-9 Compact. (Image via the author.)

The picture above shows it being carrying in an appendix position inside the waistband holster. Appendix position refers to carrying the holster well in front of the hip. It’s an effective position for concealing a handgun under a shirt and enables fast draws of the handgun. 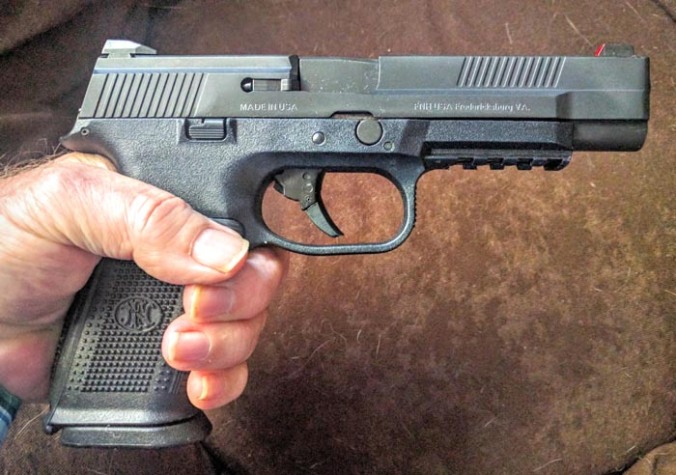 The largest gun on this list is the FNS-9 Longslide. (Image via the author.)

This is a full-sized 9mm handgun that would typically be carried by a uniformed officer in an outside-the-waistband (i.e. not concealed) holster like one shown below. 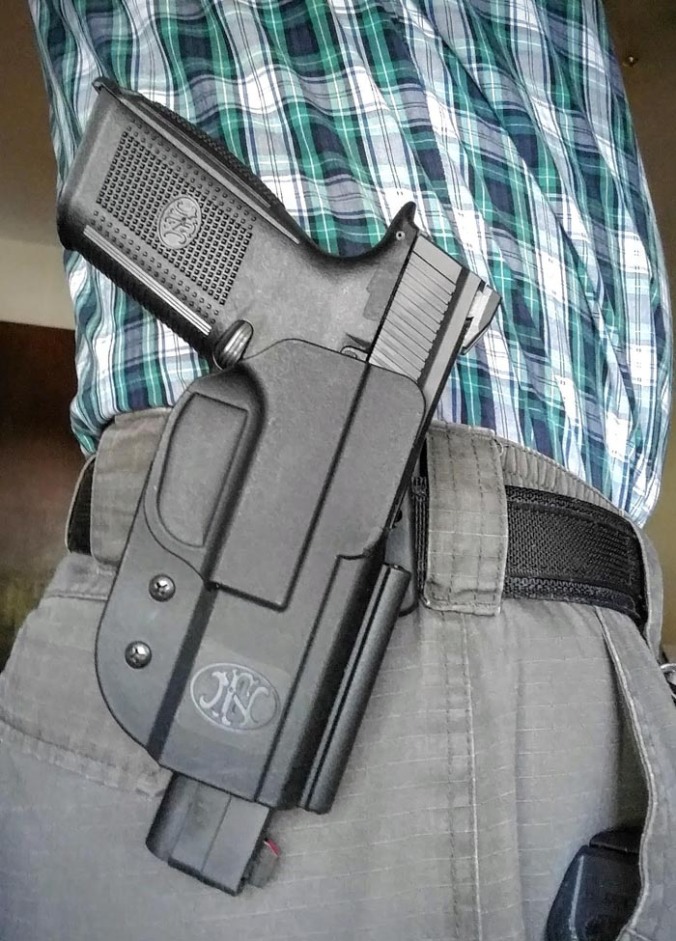 (Image via the author.)

It is extraordinarily accurate and has a 17-round magazine. I’ve even hit torso-sized targets at 110 yards with this pistol. It is possible to conceal this large handgun under a heavy jacket, or in a large purse or briefcase. It provides the person carrying it with an extremely capable handgun.

I’ve given you a variety of choices for arming your protagonist. Just remember the tradeoff between size and ease of use and the relative weakness of a handgun compared to a rifle. It doesn’t work as it is depicted in many movies. Handgun bullets can’t knock people down or cause heads to explode! 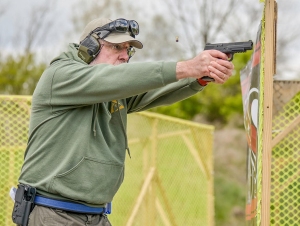 He now resides in the little college town of Huntington, West Virginia, where he writes, competes in Practical Pistol and Rifle competitions, and is very happily married to a truly wonderful wife. He is the author of two Cold War spy novels, Trapped in a Hall of Mirrors: How The Luckiest Man in the World Became a Spy and Funhouse Mirrors. More information can be found about Connick at http://michaelconnick.com.

12 thoughts on “5 Small Pistols for Your Story’s Protagonist”