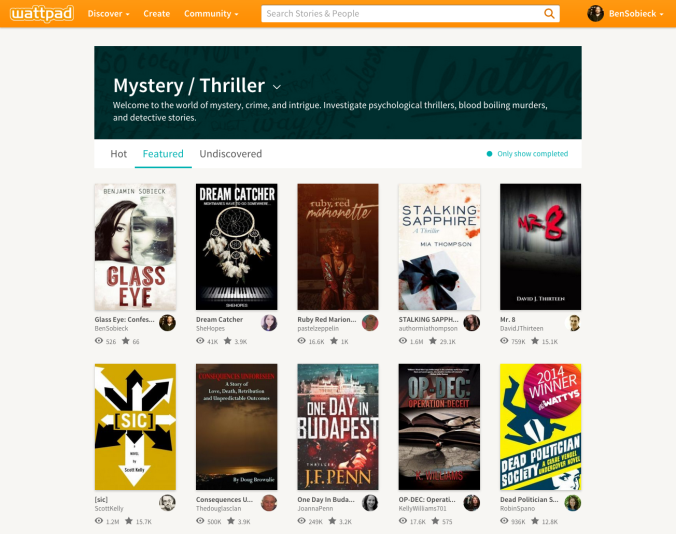 The terrific folks at Wattpad (aka “the Youtube of books”) are featuring my novel, Glass Eye, for the next six months. This means you can read the novel in its entirety for free here on Wattpad.

What’s in it for me if it’s available for free? Like a lot of writers using Wattpad, this is something I’m learning the answer to gradually as I experience the full weight of the platform.

Part of the attraction of Wattpad is its massive readership, which stands around 30 million or so. If you can snag enough eyeballs, a sponsor might tap you to write in support of a movie or product launch, or you might attract a publisher. It’s the query process on a whole new level.

Other than that, Glass Eye is available for sale on all of the major e-book retail sites. I’m hoping I can convert some sales from the exposure, but I’m not optimistic. I think most Wattpad readers want to stay on Wattpad to read instead of using the site as a preview mechanism.

No, the real opportunities will come in the form of something else. What that looks like I can’t say, but the featured spot is already opening some doors. I’ll be doing some writing for the official Wattpad presence in the coming weeks.

In the meantime, you can read Glass Eye here on Wattpad. Enjoy!

*** Update After One Month of Being Featured ***

After 40,000 or so reads, a pile of comments and some fun times chatting with readers, I’m not sure what the end game here is for the writers on the site. It’s one thing to help writers build a platform, sure, but if you’re marketing yourself as “the YouTube of books,” then why aren’t you sharing ad revenue? Because there’s little to no monetization otherwise. Wattpad readers will demand more content from you, but they refuse to pay for it. You could use Wattpad stats to fish for a publishing contract, but isn’t that just another way of paying a writer through exposure?

It’s amateur hour on that site for a reason. The site can boast about traffic, but I wonder how long that’s going to last unless it gives up some of the pie.

*** Update After Three Months of Being Featured ***

I’m looking at Wattpad differently now, and I think my goals didn’t match what the site offered when all this started. The point of Wattpad is to build an audience. I wouldn’t confuse that with exposure necessarily, because the first is the answer to a question and the second is one of several vehicles to get you there.

Having a readership at the ready isn’t something a writer can buy. It takes time and effort. Wattpad’s true power comes from speeding up that process.

Thousands of hardcore readers, the types that wind up influencing the casual lot at the base of pop culture, have read Glass Eye: Confessions of a Fake Psychic Detective. That’s worth something, especially since Zandra’s character is by far the most accessible of my creations to mainstream readers (their words, not mine). Now to figure out the next step.

And Now for Another Update

That next step, as I’ve come to learn, is called Wattpad Stars. The gist:

The program helps writers take their skills to the next level, and provides brands and publishers with an opportunity to tap into Wattpad’s roster of talented digital influencers.

This means writing native advertising on the site, as well as a shot at reaching publishers and film producers. It’s the end game I was wondering about earlier.

Moral of the story: If you find success with building a readership on Wattpad, you’ll probably want to apply for Wattpad Stars. Can’t hurt, and it’ll open up some opportunities if you’re accepted.

The jury is back with its verdict, and I hereby declare Wattpad a winner. It took time to get to this point, but I’m convinced this is one of the best avenues for building a readership and finding new opportunities available to writers. The interaction with readers is worth the effort alone, not to mention a few things I’ve got cooking behind the scenes.

If Wattpad plays its cards right, it’ll disrupt publishing in the next couple years the same way Amazon Kindle did in the 2000s. Get on board before everyone else figures it out.

Yep, Wattpad is the real deal. Here’s why.

Hello, Wattpad Stars program! I won’t ever regret my decision to publish to Wattpad.

This is it. The Wattys. The world’s largest online writing competition. And I won. Speechless. Read more here.

3 thoughts on “Thoughts on My Novel Being Featured on Wattpad”