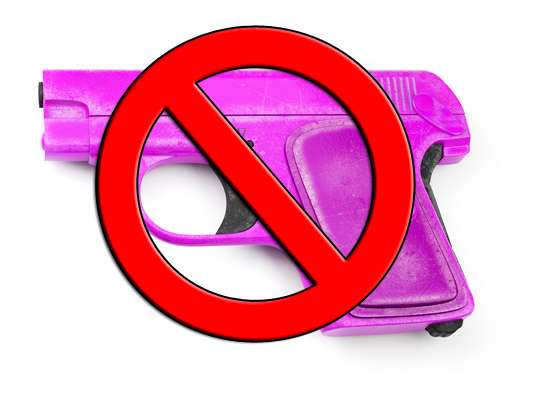 Pink firearms and knives are marketing tools whose most practical use is gnawing out a discussion about gender in the sporting goods department. I’ll save that for another day and let writer bud Laura Roberts explain how she settled on a handgun for her female detective character, Venus Delmar. Roberts took the time to research the perfect Glock – and it sure in the red hell ain’t pink.

You can read all about Delmar’s saucy adventures in Roberts’ serial novel, The Case of the Cunning Linguist. I highly recommend subscribing to each installment of the novel on Jukepop. It’s a fun way to read the story one chapter at a time. I’m a fan of Roberts’ work anyway, and the new chapters of Linguist are a highlight of my week.

I’ll be the first to admit, I’m no expert on matching weapons with characters. In fact, I asked Ben for some advice on the subject when I was brainstorming ideas for my latest work, The Case of the Cunning Linguist.

My main character is Venus Delmar, a stripper-turned-sleuth who lives in Paris. She’s not an ex-cop, like many PIs, just a woman who knows her way around some sleazy dives and shady dealers.

In short, she’s a woman who wants to be taken seriously in a man’s world. What kind of gun would work best for such a situation?

At first I was tempted by a .25 Beretta. I had read a great letter to Ian Fleming on Letters of Note, where the infamous author was chastised for arming James Bond with a “lady’s gun, and not a really nice lady at that.” I liked the idea of swiping Bond’s original gun for Venus — a woman who most would probably consider a “not really nice lady,” given her stripper past and propensity to stash her handgun in a garter.

Of course, given the fact that the letter writer helped Fleming choose a more suitable weapon for 007, and in the rest of his outings Bond carries a Walther PPK, the Beretta connection is lost. A bit of a dead end for my lady PI.

And, really, why should James Bond have all the fun of choosing weapons? Venus still needed to find a gun to fit her lifestyle and personality.

I began Googling images of the Walther, to see what the gun actually looked like. Having never set foot in a gun shop, much less taken a day at a shooting range, my knowledge of guns is strictly limited to the fictional realm. I wanted to get a good visual of Bond’s gun to keep on brainstorming ideas for Venus. 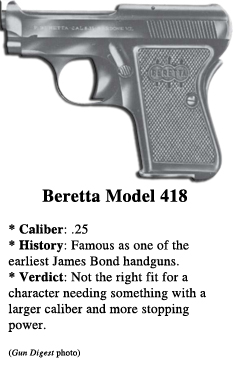 As Ben suggests, part of the process of choosing a gun for your character involves checking out the size of the weapon. I imagine Venus has relatively small hands, so the original Beretta idea made sense for her. She’s also more likely to need a gun for stealth than cop-like bluster, so she wouldn’t want anything too flashy. But what do cops carry, anyway?

I headed to the Glock website to check out some of the company’s offerings. They had a few suggested specifically for women, but I liked the idea of bucking their system and checking out the rest of the merchandise instead. Venus would surely sneer at being steered towards the “lady’s guns,” in any shop. What next, a pink pistol?

After much browsing, I finally settled on the Glock 36. The matte black finish looked great for a user concerned with stealth, and the gun is small enough for a woman’s hands without being cute. In fact, the G36 is billed as “easy-to-use, hard to see, and tough to face” — perfect for a woman looking to be taken seriously whenever she points the weapon at your skull.

Though I don’t anticipate Venus needing to blow anyone’s head off in my novel (which is, after all, set mainly in a Gothic cathedral in France), I like the idea of sending a strong message with her weapon of choice. She’s a lady who doesn’t mess around, and her gun should be, too. All the better if she need not fire a single round to get her point across.